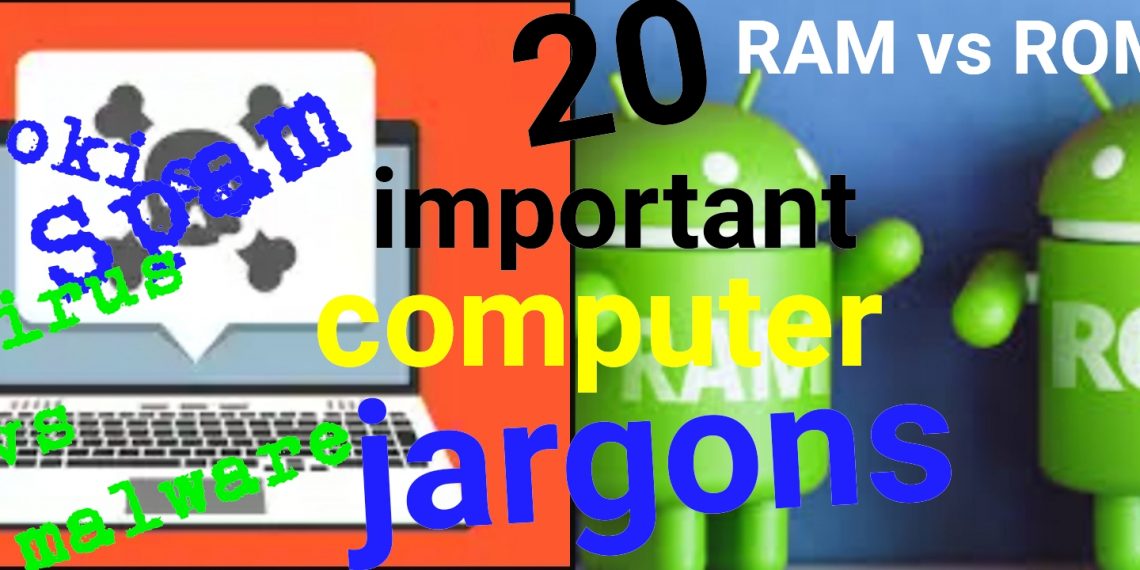 As you’re using your smartphone or pc, you might probably come across such terms like, caches, cookies, spam, firewall, bandwidth etc. They’re a huge bunch of jargons used in the computer world. Some may only be relevant to computer experts, but as smartphones and computers become more common in everyday life, some terms also become unavoidable. So it a good thing to know about them once and for all. This article has just selected some important computer terms you should know.

Any time you are online navigating between websites, you are either using links or URLs.

A typical URL must specify the protocol used to access the resource, the name of the host computer on which it is located, and the path of the resource: http://www.server.com/main/folder/resource.html

The above URL indicates that the document resource.html is located at the web server “www.server.com” where it can be found in the path /main/folder.

A hyperlink, or otherwise known as web link or simply link could be a word, phrase, or image that you can click on to jump to a new webpage or a new section within the current document. Hyperlinks are found in nearly all Web pages, allowing users to click their way from page to page.

Hyperlinks are what allow webpages to connect to other web pages and without them you would need to know the URL for every page on the Internet.

For example, “https://thingstoknow.com.ng” is a URL for this website, where you have to copy it to a browser to see the page. While “visit our website” is a hyperlink that you can just click to jump to the homepage.

When you are connected to a network, sometimes can you receive messages like “your internet bandwidth is slow” “your network bandwidth is low”. Here’s what the term bandwidth means.

In computer networks, bandwidth is used as a synonym for data transfer rate, the amount of data that can be carried from one point to another in a given time period (usually a second). Network bandwidth is usually expressed in bits per second.

In a more layman’s term, bandwidth means the data transfer speed i.e. how fast the data can move from one computer to another. Bandwidth is an indication of how quickly data travels along a connection. The greater the bandwidth, the faster data will be sent and received.

So, for example, if from your desktop at home, you are able to download a 600 MB video file from the internet in 60 seconds then you can say that you got a bandwidth of 10MBps.

These are usually the most used tech terms especially for smartphone users. After all, everyone needs more space to store their files and at the same time speed up their devices. These terms are sometimes used interchangeably in the computer world. No doubt, the idea is quite complicated for a non computer professional to fully grasp. But don’t worry, I’ll break it down as much as I can for even a novice to understand.

Your device, be it a phone or a pc has 3 distinct types of storage chips. The RAM, ROM, and the Internal storage (or secondary storage).

RAM(read only memory): On the other hand, RAM is a fast volatile memory that temporarily stores frequently used applications for fast retrieval by the processor and OS. You don’t store your files on it, the OS chooses what to store in the RAM according to the applications you open. It erases everything as soon as you power off the device. This doesn’t happen in Internal memory.

ROM(read only memory): ROM on the other hand is a type of non-volatile memory which contains the essentials code to run your device. It is typically the memory that resides on your computer mainboard to store vital instruction code that almost never changes — hence “read only.”

Unlike the internal storage or RAM, you can’t store any data on the Rom, your device only reads data from it and this data is usually instructions (firmware or the like) for your computer. It’s not something that is used for the day-to-day computing of the user, and usually it’s only changed through very low-level methods like firmware updates.

Mega pixels or MP is the number of pixels present on a photosensor of the camera. This term is a Digital Photography terms. Sensors are embedded with millions of tiny light receiving centers which are called pixels. Most modern cameras have number of pixels in the order of 1,000,000 (this is what mega is before pixels). Thus a camera which have sensor with 16000000 pixels will be said to have 16 megapixel camera.

Higher the number of megapixels means larger print or display of that photograph you can make before the image getting a pixelated i.e you seeing small boxes on your image. to put this in perspective let me say that if you have a latest ultra HD screen of 4k resolution (i.e. 4 times full HD resolution) you should have an image which is shot in 8MP to project on it without seeing your image pixelating. Or in print you can make a 12″x8″ size print of same 8 MP image without seeing any loss in image quality.

Malware is a short for “malicious software”. A generic term used to describe all sorts of unwanted or malicious code, which includes viruses, worms, spyware, and pretty much anything that is specifically designed to cause harm to your PC or steal your information.

Malware consists of code which is designed to gain unauthorized access to a network or system to cause extensive damage like: disruption of services and system working, manipulation of results, stealing information etc. Malware is a broad term and it constitutes all types of malicious software like Virus, Trojan, Worm, Adware, Ransomware, Backdoor etc.

Virus, on the other hand, is a program that copies itself and infects a PC, spreading from one file to another, and then from one PC to another when the files are copied or shared.

Viruses can enter your computer as an attachment of images, documents, or audio and video files. Viruses also enters through downloads on the Internet. They can be hidden in a free/trial software or other files that you download.

By and large, all of the above will have some malicious intent – to harm data, spy on computer activity and so forth. Malware is a general term for all such programs – it simply means any software, of whatever sort, written with a malicious intent. Viruses are generally malware but there is more to malware than just viruses.

At a basic level, all computer data is just a series of 0s and 1s. Each of these is referred to as a “binary digit”, for which “bit” is just an abbreviation. A byte is (generally) a collection of eight bits, so called because of the pun with bit and bite. Similarly a collection of four bits – half a byte – is sometimes called a “nybble”.

In order to refer to large numbers of bits and bytes, various prefixes are used, as in :

To switch a computer off and on again, allowing its operating system and programs to be reloaded. Note that this is not the same as placing a computer into standby/hibernate and then resuming. A reboot requires that all software is completely reloaded.

The term derives from “bootstrap”, as in the phrase “to pull oneself up by one’s bootstraps”, because of the similarity to that seemingly impossible act (as a computer can’t run without first loading some software but must be running before any software can be loaded).

Basically, a cache is a term which could be the software or the hardware component of the computer system which successfully stores temporary data so that the requests which are made in the near future can be accessed and or served much more faster. Caches can be found on computers, phones, apps and web browsers

Browser’s cache: We all have cache stored in our internet browser. It’s essentially a folder which contains small pieces of information taken from our browsing experience and the sites we visit. The aim is to make pages we revisit load faster.

The browser stores the web site contents like the images, videos, audio, text etc on our computer so the next time when we load the same website we will find it loading faster.

Cache memory : The cache memory is a temporary storage area that stores small pieces of data and information. It is different from your computer’s main storage, which is usually the RAM (random access memory).

The purpose of the cache memory component is to increase speed. It’s located physically closer to the processor than the RAM component making it 10 to 100 times faster than RAM.

A small text file sent to your computer by a web site you have visited. These can be very useful in that they can allow the web site to recognize who you are when you return. Cookies cannot store viruses or other threats, although they can be used to track your activity across different web sites in order to provide, for example, “targeted” advertisements.

A firewall is a computer software or hardware acting as a network security system that determines what type of traffic can enter and leave a network.

It’s like a barrier between networks that monitors both incoming and outgoing traffic, and either blocks or allows a specific traffic based on the predefined security settings or criteria, by that helping to keep untrusted and destructive forces away from your computer. Like viruses, malwares, and even hackers.

A firewall can come in form of a hardware device – like one embedded on a router. Or a software program – Like a Windows firewall program.

Sometimes you can be asked to check the spam section of your email to see some messages. What does the term “spam” mean?

In general Spam refers to any kind of unwanted, unsolicited messages(often emails) that are sent to multiple recipients majorly with the intent of advertising something.

If you are spamming, you could send bulk of mail messages advertising stuff, send multiple messages on messenger asking for money, send chat messages pretending to be a desperate person trying to find a date but link to a pay service that you want to advertise, you could create profiles in a social network to propagate your message, add friends on Twitter etc, etc.

While trying to access some sites, or perform certain online activities, like commenting, signing up, or posting to some websites. You can be asked to confirm if you are a human or a robot. This is often followed by solving a so called captcha. What’s that exactly? Find out.

CAPTCHA stands for the “Completely Automated Public Turing test to tell Computers and Humans Apart. CAPTCHAs are tools you can use to differentiate between real users and automated users, such as bots. CAPTCHAs provide challenges that are difficult for computers to perform but relatively easy for humans.

CAPTCHAs are used to prevent spam on a website, prevent automated posting to forums or the like, and to validate someone’s identity before they login or purchase items online. A CAPTCHA is designed so that it is easy enough for all humans to figure out but so that no machines can figure it out.