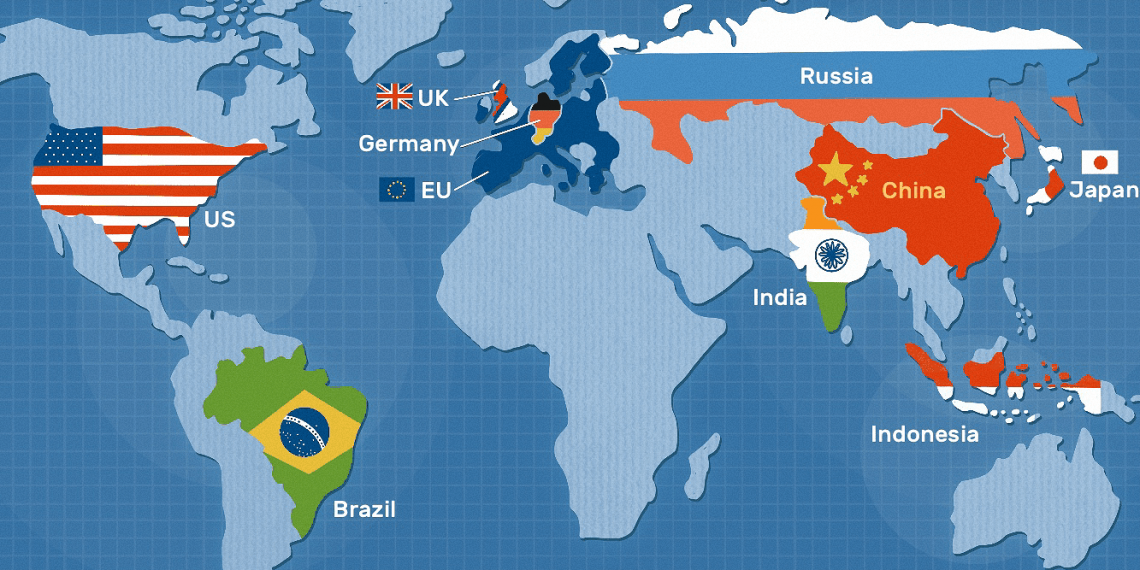 Perhaps you can guess some of them…Right?

Without doubt, there are so many large economies in the world today.

In this article today, we will look at the top 10 list of these largest Economies, and their GDPs.

As we may already know, GDP is short for Gross Domestic Product.

It is a system used to value all the goods and services which were provided within a particular country within a specific time.

Whenever the wealth of countries are being talked about, the major thing that comes into play is their GDPs.

Today in this article, we will look at the official list of top ten largest Economies in the world, and their GDPs.

This list is according to the ranking of the International Monetary Fund (IMF) by nominal GDP. Without wasting time, let us get down to this comprehensive list at once.

So here are the top ten largest Economies in the world by their nominal GDP.

On the tenth spot in this list, we have Canada.

Canada has one of the highest calculated values of natural resources in the world.

The Per Capita income of Canada is ranked at number 20 globally, while their GDP (PPP) is ranked 17th.

Judging from expert predictions, the GDP of Canada is expected to rise rapidly over the coming years.

Moreover, they are said to be one of the countries with the least level of corruption in the world.

With such a huge and stable GDP, Canada is currently ranked as the tenth largest economy in the world as of 2021.

The ninth largest economy in the world today is none other than Brazil.

Moreover, this country is blessed with several natural resources.

Brazil is blessed with iron ore, gold, timber, and more. As we speak, this country is the biggest and most populated country in Latin America.

Before now, Brazil was one of the fastest-growing countries in the whole world.

However, they have experienced several economic setbacks and corruption troubles that have slowed down their speed.

With the current structure of the Brazilian economy, we can say the majority of Brazilians live below the poverty line.

However, they are still ranked as one of the largest Economies in the world with a nominal GDP of $1.85 Trillion.

When talking about the largest Economies in the world, a lot of things come into play.

With a current nominal GDP that hits almost $2 Trillion Dollars, Italy stands as the number eight largest economy in the world.

Judging from their current growth, Italy is predicted to rise up the scale in a few years from now.

Although they have such a large and stable economy, Italy still faces some minor issues like unemployment and debts.

However, this actually doesn’t affect the overall rating of this country. Today, Italy is the number eight biggest exporter across the globe.

They export different products ranging from food and clothing to machinery and vehicles.

In seventh place on this list, we have France.

According to research, France experienced a significant increase in unemployment over the past few years.

However, this doesn’t stop them from climbing up the scale. France is one of the most diversified Economies in the world today.

They fully operate in different industries like the chemical industry, tourism, and even agriculture.

Moreover, France is the second largest exporter of agricultural products across the globe.

Furthermore, they are also the most visited country in the whole world. With such a huge and stable GDP, France is currently ranked as the seventh largest economy in the world.

On the sixth spot is the United Kingdom.

The economy of the United Kingdom is one that is majorly made up of services in the financial sector.

Other sectors which make up the economy are manufacturing and agriculture.

According to reports, the United Kingdom is predicted to drop down to the seventh largest economy in the world in a few years.

The UK was actually the first nation to industrialize back in the 18th century.

However, they are no longer the biggest players in the game. A few years back, this country was ranked as the tenth biggest exporter of products across the world.

Even as you read, the UK exports goods to close to 200 countries around the world.

Moreover, the aerospace sector in the UK is the second largest in the whole world.

With a current nominal GDP that hits about $2.81 Trillion Dollars, the United Kingdom is the sixth-largest economy in the world today.

With a current GDP of over $2.94 Trillion Dollars, India overtakes the UK to become the fifth largest economy in the world.

However, the population of this country affects their GDP Per Capita income.

Judging from the trends, the economic growth of India is predicted to experience a slight weakness.

However, this will not be enough to pull them out of this list.

As we all know, India is a developing economy. The two major sectors in India are agriculture and manufacturing.

However, they have an overall diversified economy.

With a current GDP that clocks over $4.0 Trillion, Germany is ranked as the fourth largest economy in the world.

Aside from being a large economy, Germany is also one of the most diversified Economies in the world.

They are well known for manufacturing cars, household tools, chemicals and more.

Till date, this country is one of the largest exporters of numerous products. The German economy is one which is filled with one of the most skilled workforce in the world.

With a per capita income that is ranked as the 18th highest in the world, Germany is indeed a blessed nation.

In third place on this list of largest economies in the world, we have Japan.

One can even boldly say that the economy of Japan is fully based on business and manufacturing.

Over the years, the economy of Japan has continued to grow at rapid rate. Most of their growth comes from the export of electronic products across the globe.

Moreover, the automobile sector in Japan is the third largest in the world.

With such a diversified economy and a huge GDP of $5 Trillion Dollars+, Japan is ranked as the third largest economy in the world.

One cannot talk about the largest Economies without mentioning China.

With a nominal GDP of over $14 Trillion Dollars, they sit firmly  as the second largest economy in the world.

It is said that China actually has over $23 Trillion Dollars from natural resources only.

However, the economy of this country is fully driven by manufacturing and business.

Today, China is the largest exporter of electronic products across the globe. With a diverse economy with several streams, China is indeed a home of foreign investments.

They are expected to keep rising through the years.

Generally, the covid-19 pandemic actually affected the economy of this nation. However, they seem to be back on track with good growth stats.

The largest economy in the world is none other than the United States of America.

Back in 2016, it was estimated that the USA had a total value of $45 Trillion from natural resources.

With such a huge figure, they are ranked as the second largest country in terms of natural resources.

As a developed country, there are several factors that affect the economy of the United States.

Today, the United States is ranked as one of the major manufacturers in the globe. Moreover, the US Dollar is also the most used currency on the global market.

With such a huge GDP coupled with a stable and diversified economy, the USA is ranked as the largest economy in the world.

Final Thoughts On “10 Largest Economies In The World”

From this informative article, you can confirm that there are indeed several large Economies in the world today.

Ranging from business to manufacturing and more, these Economies have created a stable income for themselves.

Today, they are ranked based on their economic stability, growth and GDP worth. In all, that will be all we have on this article.