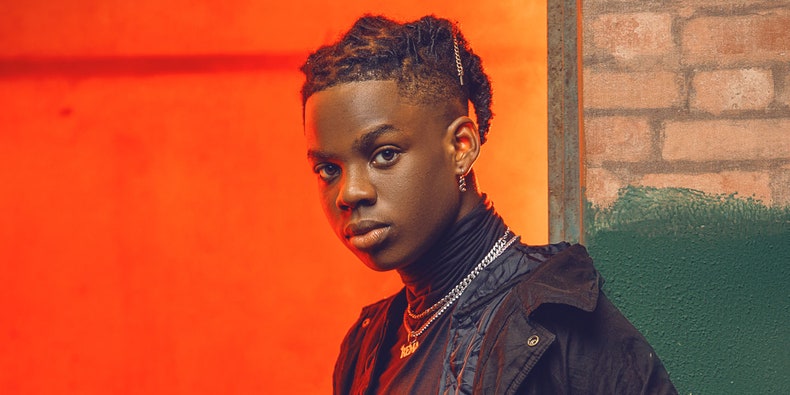 As we all know, the Nigerian music industry is a fast-growing industry in the world today.

As we speak, the Nigerian music industry is the biggest in Africa.

Today, so many of our artists are well known all over the world.

Now, while these big artists keep making the continent proud in the International scene, new artists keep appearing in the industry.

This is a signal that the Nigerian music industry will continue to remain relevant through the generations.

Talking about new and upcoming artists, the singer ‘Rema’ is one of them in Nigeria.

Rema is arguably the best upcoming artist in the country.

Though new in the industry, he has attracted so much fame within a short period already.

Today, there is hardly a music lover in Nigeria who haven’t heard of this talented singer.

If you haven’t really heard of him, then this article is an opportunity for you to know more about him.

In this post, we are going to look into the life of this talented singer, his current net worth, and more.

Let us get down to the real deal at once.

Divine Ikubor (aka Rema) is a Nigerian musician and songwriter who was born on the 1st of May 2000.

The singer was born and bred in Benin City, Edo state, Nigeria.

Though he is new in the industry, the singer rose to fame at an extremely fast rate.

Today, he is predicted to become one of the best artists in the Nigerian industry.

There is hardly any Nigerian music lover who hasn’t heard of the name ‘Rema’.

That is to tell you how famous this kid is.

Today, he is even ranked as one of the most popular young stars in Africa.

Divine Ikubor grew up in a Christian family in Benin City.

As a child, he grew up rapping and singing while in school.

The singer actually had his primary and secondary education in Benin City where he grew up.

Having gained much experience while singing and rapping at a very young stage in life, the singer really found it easy to climb up the scale in the music world.

Rema actually rose to the spotlight after he posted a video of himself freestyling the song ‘Gucci Gang’ by D’Prince in 2018.

Later on, D’Prince flew Rema to Lagos State and signed him into the Jonzing World Records.

This is actually a subsidiary of the popular Mavins Records.

Though he was already gaining some fame, Rema became popular all over the nation after dropping the hit single titled ‘Iron Man’.

This song appeared on the official Playlist of Barrack Obama in 2019.

His first EP which was titled ‘Rema‘ also featured on the number one spot on Apple Music Nigeria the same year (2019).

Ever since, Rema continued to drop several EPs and hit singles.

Some of his lead singles are tracks like Dumebi, Bad Commando, Lady, Woman, Ginger Me, and more recently, Piece Of Mind.

He is very popular today, and he is one of the few Nigerian artists who are active in the trap genre.

Rema is into the Afrobeat and trap genres, and he is very much appreciated for his contributions to the industry.

Though he is new in the industry, Rema has already managed to drop several tracks.

However, the singer is yet to drop an album.

He is still fresh and new in the industry, so we expect him to drop an album in the coming years.

Although Rema has not dropped an album yet, he has dropped a couple of EPs.

All four of these EPs were successful, and this is a strong signal that this young talent is indeed a strong force in the Nigerian music industry today.

We expect an album from this singer in the nearest future.

Though the singer hasn’t talked about releasing an album, we are sure he is either working on something already, or he will soon be.

This is an assumption, however, and it should not be taken with much seriousness.

A short while after Reekado Banks left Mavins Records, Rema was signed into a subsidiary of the label by D’Prince.

Mavins Record is one of the most popular music labels in the country today.

The famous singer ‘Tiwa Savage’ was also a member of this label.

This record label is actually owned by Don Jazzy.

He created this label after his separation from D’Banj during the MoHit days.

According to D’Prince who actually discovered Rema, he said the young boy is so talented, that he thinks the world needs to hear him.

After D’Prince discovered Rema, the young singer wrote songs for Jonzing World for a while, before he was actually introduced to Don Jazzy.

When he was introduced to Don Jazzy, his stage name was changed from Rhema to Rema.

In 2019, Rema was officially announced as a part of the Mavins Record under the Jonzing World subsidiary.

Shortly after that, he was referred to as the future of Afrobeats.

Although it is still a bit too early to make such predictions, a lot of fans believe that this singer will be consistent in the industry.

After signing and completing his deal with Mavins Records.

He dropped his first EP titled ‘Rema’ and continued to drop back to back hit tracks and other EPs.

As is expected of him, the singer ‘Rema’ has already bagged several awards and nominations.

In his debut year in the spotlight, Rema won the Headies Award for the Next Rated Artiste, and he was also nominated in the Viewer’s Choice category.

Just a few months later, he was nominated in the category of ‘Best International Act’ in the Bet Awards.

He was actually nominated alongside other top artists in Nigeria like Wizkid and Burna Boy.

They were the only three Nigerians nominated in 2020.

As time goes, we expect this talented singer to bag many more awards and nominations.

The young singer is one of the singers in Nigeria that are very active on social media.

No wonder he was even discovered through the platform.

If you are a fan of Rema, then feel free to follow him on any of his social media handles.

On this platform, the singer has a total of about 1.9 million followers, and they keep climbing higher by the day.

He goes by the handle @heisrema on this platform.

This is his official handle, and you can follow him through it.

He often drops the latest information about his musical works, collaborations, and more on his social media timelines.

If you are a fan of the singer, you can feel free to join him on Twitter through his handle.

He has a total of over 1.7million followers on this platform.

These are the major social media channels through which the singer ‘Rema’ can be gotten.

If you are a fan of the singer, you can feel free to follow him on any of these platforms.

As a new artist, much is not yet known about the private life of Rema.

We do not know if he already has a mansion of his own, but we sure know that this is something that can be done by the singer.

He surely makes a fortune from the industry, and his hits keep piling up by the day.

In terms of cars, Rema was awarded a new GAC car when he won the Headies Award for Next Rated Artiste of the Year 2019.

This is the only known car the singer has.

However, he has been spotted with some other cars.

We do not know if they are actually owned by the singer, but we just have to look out for more information in the nearest future.

What is Rema Net worth?

Although Rema is a young musician in the field, he has managed to make a fortune for himself in the industry already.

Today, Rema has an estimated net worth of $350,000 which makes him one of the richest new artists in Nigeria.

Final Thoughts on Rema Net worth

From the piles of texts above, you can see that the singer ‘Rema’ is indeed a blessed fellow.

His story actually fits in with the popular adage ‘From grass to grace’.

The singer is indeed one of the best young talents in the industry today, and he is loved by so many people across Africa.

If you found this article useful, endeavor to drop your comments below.

We value your opinions…