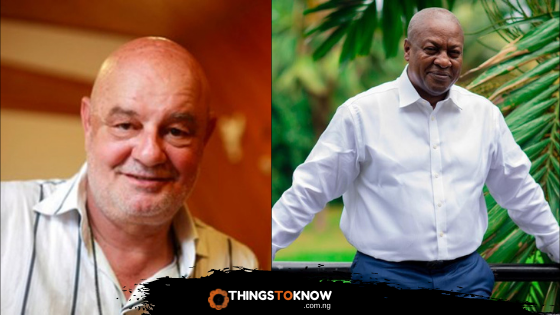 So, who exactly are the richest men in Ghana today?

Are they actually people you know?

Well, as we all know, Ghana is one of the popular West African countries today.

Over recent years, this country has experienced a real boost in its economy.

As a result, Ghana is now a conducive place for world class businesses.

Gone are the days when there were a little number of billionaires here in Africa.

Today, Africa is a strong force in the world business scene.

In this article, we are going to look at these top billionaires in Ghana.

These people have made so much money that they are respected for their achievements everywhere they go in the world.

Now, without taking any more of your precious time, let us go through the top 10 list of the richest men in Ghana as of 2021.

Here is the list of top 10 Richest Men in Ghana.

The tenth person in this list of the top ten richest men in Ghana is Nana Akufo-Addo.

He is actually a lawyer and a politician.

Back in 2012, he contested the presidential elections in Ghana but lost the seat of the presidency.

After finishing his degree in Economics from the University of Ghana, Nana Akufo-Addo later studied Law at the Inns of Court School of Law in the United Kingdom.

Today, he is the founding partner of Akufo-Addo, Prempeh & Co Firm.

With a current net worth of $250 Million, he sits firmly as the tenth richest man in Ghana.

Recommended for you: The 10 Richest Countries In Africa (2022)

Dr. Kwesi Ndoum is another rich Ghanaian who makes it to this list.

Kwesi first started out as an insurance underwriter, before he grew into several other businesses and became a vast businessman.

With a current net worth of $300 million dollars, Kwesi is ranked as the ninth richest man in Ghana.

Serge Bakalian is also featured in this list of richest men in Ghana.

He is a Ghanaian business tycoon who has been in the business world for a long time now.

Serge is the Chief Executive Officer of Takoradi Flour Mills.

From the moment he took over the business from his father, he has continued to run it successfully to date.

His company is one of the companies in Ghana that make millions of dollars annually.

With a net worth currently estimated to be $460 Million dollars, Serge is ranked as the number 8 richest man in Ghana.

The seventh richest man in Ghana is Ghassan Yared.

This business tycoon owns the largest transport company in Ghana.

His transport company comprises over 400 vehicles, and they have strong links all across Ghana.

He is the founder of Mabani Holdings Ghana Ltd.

This is a real estate firm through which he carries out several major real estate projects.

Recently, this company has signed a joint venture deal with Actis.

This company has invested over $150 Million in the real estate sector in Africa.

Currently, these two companies are working on a huge project.

This is a 70,000 sqm mixed-use hotel, office and retail development site.

This project is actually being sited on a seven-hectare land.

Aside from this project, Mabani Holdings is currently undergoing several other wonderful and lucrative projects.

With a current net worth of $480 Million Dollars, Ghassan sits firmly as the seventh richest man in Ghana.

Do you know: Which State is The Poorest in Nigeria 2021?

Samuel Esson Jonah is one of the foremost businessmen in Ghana.

He is the chairman of Jonah Capital.

This is an equity fund that is based in South Africa.

Before now, Jonah was the head of AngloGold Ashanti.

He shared the strategic leadership of this company with Bobby Godsell who was the chief executive officer.

With a net worth of $650 Million, he sits firmly as the sixth richest man in Ghana.

Kwabena Duffuor was once the Minister of Finance in Ghana.

Over the years, he has also served as the governor of the Bank of Ghana.

In 1999, Kwabena was listed as one of the top four Central Bank Governors in the world.

This was at the International Monetary Fund/World Bank meeting.

As a businessman, Kwabena is the founder of Hoda Holdings.

This is a company with several subsidiaries in the fields of Banking & Insurance, Mining, Farming, Media, and Real estate.

He is the founder of the famous Institute of Fiscal Studies.

This is a non-profit initiative which Kwabena established in 2013.

He founded the UniBank which later collapsed in 2018.

Today, Kwabena has a net worth of $680 Million.

On the fourth position in the list of richest men in Ghana, we have the Irani Brothers.

These brothers control over 55% of the flour market in Ghana.

They first started with just bread flour, but they later added pastry flour to their line of production.

This was actually a result of the general demand for this domestic product.

Their company imports over 180,000 metric tonnes of wheat per annum for processing.

They also account for 60% of the total sales of wheat in Ghana.

What gives the Irani Bothers a huge advantage over other flour mills in Ghana is the fact that they are able to import such huge quantities of wheat, and they have the funding and arrangements for that.

Today, the Irani Brothers have a whopping net worth of $800 Million dollars.

The third richest man in Africa today is John Mahama.

He is also the first head of state in Ghana that was actually born after their independence.

During the period of 1998 to 2001, Mahama also served as the Minister of Communications in Ghana.

With a current net worth of $900 Million Dollars, he is ranked as the third richest man in Ghana today.

Kwame is a Ghanaian physician and politician.

As a politician, he has served in different important positions.

He was a member of the Ghanaian parliament, and he also served as the minister of defence during the term of former president John Kufuor.

John Kuffuor is actually the brother of Kwame Kufuor.

Later between 2008 to 2009, he again served as the Minister of Interior in Ghana.

Recently in 2017, he was appointed as the Chairman of the Board of Trustees of the SSNIT (Social Security & National Insurance Trust).

He has been in this position ever since.

Over his years in office, Kwame has continued to perform excellently.

He currently heads the Ghana Chamber of Mines.

With several investments and businesses spread far and wide, Kwame is currently estimated to worth $1.2 Billion.

This makes him the second richest man in Ghana.

On the number one spot in the list of richest men in Ghana, we have Ernesto Taricone.

Before now, this number one spot was often taken by Charles Ampofo, but he is now late, and will only be featured in all-time lists.

Ernesto is the Chief Executive Officer and chairman of Trasacco Group.

Being a diverse businessman, he has several investments in the fields of mining, Real estate, Agriculture, construction, and more.

Most of his businesses are based in Ghana, and this contributes greatly to the economy of the country.

With a net worth of $1.3 Billion, Ernesto is currently the richest man in Ghana.

From this article, you can see that there are several billionaires in Ghana.

Not just in Ghana, but Africa as a whole.

Today, Africa is a hub of billionaires.

Billionaires keep emerging on a yearly basis, and this is a strong signal that Africa is indeed a strong and rising force in the world business scene.

Having seen this list of richest men in Ghana, one can easily tell that Ghana is indeed a nation that is business-friendly.

Although there are politicians on this list, most of them later ventured into the business world, and they are ranked as rich businessmen today.

If you actually found this article useful, then feel free to drop your opinions in the comment session below.

In all, I hope you enjoyed this article.

Do have a nice day!