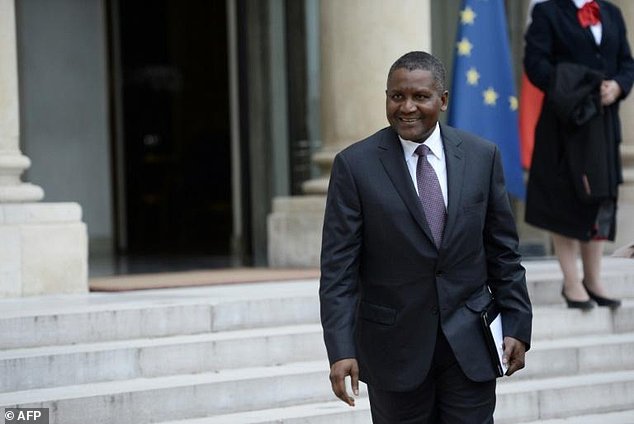 Did you know that the top 25 richest people in Africa have a collective net worth of over $80 Billion dollars?

Now, that might be a bit shocking to you, but it is absolutely true.

These richest people have made these huge fortunes from several lucrative investments in different fields and industries like oil & gas, telecommunications, construction, and more.

Today, they live their dreams and rule their individual industries.

Without a doubt, Africa is on the progress chart and our billionaires keep climbing up the scale.

Once again, the richest billionaire in this list is a Nigerian business tycoon, and there are also some new billionaires included.

Guess what! They just made it to the list.

These billionaires have made Africa proud and they are a strong force across the globe today.

Now, let us explore the list of these richest people in Afrca…

For the 8th time in a row since 2013, Aliku Dangote has been the richest man in Africa.

He is the founder of the Dangote Group which is spread worldwide and is famous for the production of cement, flour, sugar, salt, and more.

He is also into the oil and gas sector.

Dangote is a very influential person and was even given the highly honorable award of the title ‘GCON’ meaning Grand Commander of the Order of the Niger.

This award was given to him by former Nigerian president Goodluck Ebele Jonathan.

Nassef Sawiris is the son of the popular world billionaire Onsi Sawiris.

He is currently said to own about 6% of the stakes in the popular company ‘Adidas’.

Nicky Oppenheimer is a very wealthy business tycoon and investor, who was the sole heir to popular De Beers.

De Beers is the world’s largest diamond company in the world.

Johann Rupert is a very rich South African business tycoon, who is the chairman of the popular company ‘Richemont’.

The company owns Cartier and is the biggest maker of luxury watches all around the globe.

With a net worth of about $7.2Billion, Johann is currently the 4th richest man in Africa.

In 2020, Mike was ranked the third place in the list of 25 Richest People In Africa.

However, he has received a decrease in his net worth from $7.7Billion to $6.3 Billion with a lost of $600Million.

He remainds the second richest in Nigeria.

Today, they even have strong presence in some west African countries like Benin Republic, and Ghana.

Abdulsamad Rabiu is the chief executive officer and the chairman of the BUA Group, which focuses on infrastructure, manufacturing, and agriculture.

He is also the chairperson of the well-known Nigerian Bank of Industry.

Rabiu is famous for his company’s production of sugar, cement, and more.

However, he also controls real estate, and he owns a couple of other investments.

On the 7th place this year, we have Isaad Rebrab.

He is the ceo of the famous Cevital.

This is one of the largest private companies in Algeria, which operates through various subsidiaries in the fields of steel mining, water purification, home appliances.

However, he also owned one of the largest sugar refineries in the world.

With an ever-growing net worth, Isaad is a very promising billionaire in Africa.

Naguib is an elder brother of fellow billionaire Nassef Sawiris.

He owns stakes in different companies and gold mines all over the world.

In 2011, he made over a whooping $4Billion after the sales of his stake in Vimplecom (A popular telecommunications company).

Today, with a steady net worth of $3.2Billion, Naguib is the 8th richest person in Africa.

Patrice Motsepe is the CEO of African Rainbow Minerals and was the first black African to make it to the Forbes list back in 2008.

His company deals on gold, platinum, and other metals.

He is a board director in several companies and is also the non-executive chairperson of the 12th biggest gold mining firm in the whole world.

Patrice has gathered enough cash for himself through numerous investments and is now the 9th richest person in Africa.

His company operates in over a hundred countries of the world.

He’s currently listed in both the Johannesburg stock exchange and the London Stock Exchange.

Naspers Media Group has the biggest capitalization of any media company outside China and the United States of America.

He is one of the richest men in South Africa, and the 10th richest person in Africa today.

Mohamed is the Head of Mansour Group, which is owned by his family.

Mohammed has racked up enough wealth from his family’s company and is now one of the richest men in all of Africa.

Akhannouch who is the current minister of agriculture and fisheries in Morocco is the founder of Akwa Group (a company originally owned by his family).

Akwa group deals in oil and gas; and has several investments in other fields.

With a personal net worth of $2Billion, Aziz Akhannouch is one of the richest men in Africa today.

Mohammed Dewji is a Tanzanian business tycoon and former politician, who is the founder of the MeTL Group.

This company was founded by his father back in the 70s.

Mohamed was the first Tanzanian to make it to the Forbes Magazine’s billionaires list back in 2013.

Youssef also owns a share in the Mansour Group, just like his younger brothers Mohamed and Yasseen.

With a net worth of $1.5Billion, he sits comfortably in the 14th position, as the number 14 richest person in Africa.

Othman Benjalloun is the oldest billionaire in this list.

He is a successful man from Morocco, who has made it so big through various investments in the banking and finance industry.

Back in 2019, the popular Business magazine ‘Forbes’ estimated his net worth to be $1.8Billion.

But in 2021, he sits firmly on the 15th position in the list of richest Africans, with a whopping net worth of $1.3Billion.

Michiel is a very successful South African businessman, who is also the founder of the Capitec Bank.

He created this bank back in 2001 and currently has a share of about 11% in the bank.

With a net worth of $1.3Billion through both his bank and other investments.

Michiel is comfortably one of the richest Africans today.

The London-based business tycoon and well-known philanthropist from Zimbabwe ‘Strive Masiyiwa’, is the CEO of the Econet Global tech group.

Through diverse investments in both the telecommunications industry and several other industries.

Strive currently has a net worth of $1.2Billion.

Just like his elder brothers Youssef and Mohamed Mansour.

Yasseen also owns a share in Mansour Group, which is one of the biggest dealers of general vehicles, caterpillars, and more in Egypt.

He is the CEO of Palm Hills Developments, a big real estate company in Egypt.

With a net worth of $1.1Billion, Youssen sits on the 18th position.

Otedola is the chief shareholder of the oil and power generation and marketing company ‘Forte Oil’.

Forte Oil has over 600 gas and petrol stations all over Nigeria and Africa, and they have so many depots.

As the head shareholder in Forte Oil, Femi Otedola is currently estimated to a net worth of $1Billion.

This makes him the 4th richest person in Nigeria and the 19th richest in Africa.

He owns a whopping 18% of the popular Shoprite Holdings with super malls all over Africa and is currently worth $1Billion.

At just 29, Stephen Saad sold a share he had in Coven Zurich (a drug company), for a whopping $3million dollars.

Today, he is the founder of the Aspen Pharmacare.

His company is currently the biggest manufacturers of generic drugs in all of Africa, and he is currently estimated to worth a whooping $980Billion.

Uzoma is a well-known tech investor, banker, and general business tycoon in Nigeria.

He is the founder of the financial tech forum and ecosystem called ‘Sparkle’.

Prior to launching this company back in 2019.

Uzoma Dozie was the General Managing Director and CEO of the famous Diamond Bank.

He was the brain behind the successful merger with Access Bank plc back in 2018.

He is one of the richest Africans today, with a mind-blowing net worth of $900Million.

Folorunsho is a Nigerian billionaire who is well into the oil, real estate, and fashion industries.

She has a major stake in the Dayspring Property Development Company, and is ranked as the richest woman in Nigeria.

Folorunsho has also been the group managing director of the well known ‘Rose of Sharon Group’, which comprises of several brands and subsidiaries in various fields.

With a networth of $900Billion, she is the 23th richest person in Africa.

The 24th billionaire on this list is none other than Jannie Mouton, the South African billionaire and business tycoon.

Mouton is the chairman of the popular PSG Group, which deals on financial services, agriculture, banking, education, and more.

He is a diversified billionaire, whose sons are also upcoming in the list.

With a whopping $900Million, Jannie Mouton is the 24th richest person in Africa.

Isabel is a child of the ex-president of Angola.

During her father’s tenure, she was said to have acquired numerous stakes in different companies in Angola.

The popular BBC once aired the news that she was accused of some corrupt practices by the authorities in Angola and is currently under investigation.

Later in June 2020, She was charged for Fraud by Angolan and all her asset was freezed.

Moreover, her assets worth over $2Billion have been sized in four different countries leaving her with an asset worth $850Million.

Forbes removed her from the billionaire ranks in January 2021 following asset freezes.

She was one of the youngest African billionaires at the 13th position in this list.

As you can see from the above list, these billionaires have all made both their individual countries and Africa proud with their success.

The people in this list are very creative business men and women.

They’ve used their vast business experiences to climb up the scale in the business world.

Today, they are all well respected for their mighty achievements.

However, do you think those individuals merit the list of richest people in Africa?

You can tell us what you think down in the comment section below.

Please, consider sharing this article about the 25 richest people in Africa with your friends on social media through the share button.