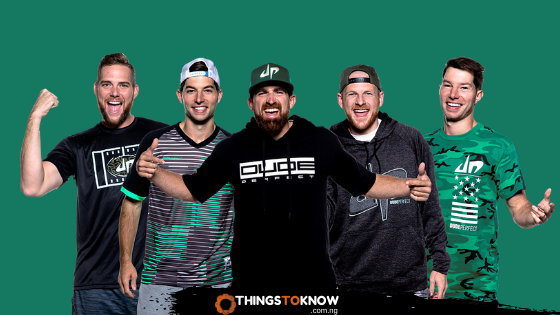 Want to know the richest YouTubers in the world?

Of course that’s a good thing to know.

Over a billion hours of video is watched on YouTube on a daily basis.

Moreover, it is the 2nd most visited website on the globe, and one of the most searched on Google.

Through the years, YouTube has become so popular that it needs no introduction.

However, we will just do that to fulfill the formalities.

It was created by Chad Hurley, Steve Chen and Jawed Karim.

They were all ex-workers of PayPal and they established this platform back in 2005.

After the success of the video-sharing platform, Google bought it from the trio for a whopping sum of $1.65 Billion in 2006.

This was just one year after its initial release in 2005.

With the help of our natural love for visual things, YouTube continues to grow by the day.

Today, about half of the total Internet population of the world visit YouTube every month.

The success and popularity of this platform actually comes from Youtubers.

These are the content creators who make this platform fun to be in.

Since it has been acquired by Google, one can even just integrate Google adsense features to his or her channel.

All that is needed is to qualify.

Today, we are going to look at the top 10 richest YouTubers in the world today.

These are people that have helped greatly in the popularisation of the YouTube platform.

They make so much fortune from the platform today.

Now, here are the top ten richest Youtubers in the world today.

Lily Singh (aka Superwoman) is actually one of the two Female Youtubers in this list of the 10 richest YouTubers in the world.

She started her YouTube career back in 2010 when she began posting comedy skits on the platform.

Over the years, her channel has continued to grow and it is now regarded as one of the biggest YouTube channels in the world.

Aside from having her own YouTube channel, she also owns her own television show.

She is even said to be one of the most influential persons in the comedy industry today.

According to sources, Lily Singh is currently said to worth about $16 Million.

This makes her the tenth richest Youtuber in the world.

Although John Green is a novelist and award-winning writer, he is also a Youtuber.

He and his brother have created several YouTube channels over the years.

All these channels still function till date.

Although YouTube is just a side business to John Green, he surely makes a lot from it.

Today, he is estimated to worth about $17 Million dollars.

This earns him this spot in this list of richest youtubers in the world.

Logan Paul is a Youtuber, Internet personality and musician.

He is one of the richest YouTubers today, and he is very famous on the YouTube platform.

However, Logan often gets himself into controversies.

During this period, he also released his music video which was named ‘No Handlebars’.

He was also accused of objectifying women in the music video.

Logan began on the Vine video platform, then he also created his YouTube channel in 2013.

Aside from being a well known Youtuber, he has also featured in some Television series.

He is even said to make most of his YouTube earnings through merchandise sales.

Today, Logan Paul is estimated to worth about $19 Million dollars.

Evan Fong is a Canadian YouTube star and music producer.

He is one of the richest youtubers in the world today.

He started his YouTube channel by creating gaming videos, after which he later began to create his own games.

His YouTube channel ‘Vanoss Gaming’ is one of the biggest gaming channels today.

As we speak, he is currently estimated to worth a whopping $20 Million dollars.

They were all actually roommates in college.

They began by posting videos of trickshots.

Their sport-oriented videos have given them a massive follower base.

This has even gone on to give them a mobile application, and a Television show in which they have Collaborated with major sports stars like Serena Williams and a few more.

They are viral Youtubers today and they have a very big subscriber base today.

Dude Perfect is currently estimated to worth $20 Million.

Ryan Kaji is yet another surprisingly rich YouTube star today.

One shocking fact is that he is also one of the youngest in the field today.

Ryan was just 4 when he began to feature in YouTube videos.

Today he is 8, and he is already one of the richest YouTubers in the world.

Recently, it has been changed to Ryan’s World.

Ryan has racked in so much wealth from this video sharing platform.

Today, he even has his very own app, television series, and also his own toy line.

Currently, his net worth is estimated to be $22 Million.

This makes him one of the richest youtubers in the world.

Mark Fischbach is a Youtuber and CEO of Markiplier.

His YouTube channel is one of the best video gameplay channels out there today.

He is a very creative Youtuber, and he has featured a lot of Youtubers and superstar celebrities in his channel.

He is a very active philanthropist who raises cash for charity organisations through his fundraising channels.

With so many investments and sponsorship deals on his YouTube channel, Mark is currently worth $24 Million.

Felix Kjellberg is the founder of the popular PewDiePie YouTube channel.

This is a gaming channel he started back in 2010.

He actually started out by posting game commentary videos.

Later on, he added some humour and branched into the comedy world.

He even later breezed into the music scene.

His influence in the gaming industry is so huge, that he instantly increases the general sales of any indie game he plays on his channel.

Today, his channel is one of the most subscribed channels on YouTube.

With a current net worth of about $30 Million, PewDiePie is one of the richest YouTubers on earth.

Daniel Middleton is no new comer in the YouTube scene.

After creating his first YouTube channel in 2010, it was focused on Pokemon.

It was after this that he created a new gaming channel which focused on children.

This was a Minecraft channel, and it was created in 2013.

After this, he later featured in an internet series to create his own graphic novel.

Today, his novel is a best seller.

With so many fans across the globe both on YouTube and other social media platforms, Daniel surely makes a lot of money.

Currently, he is estimated to be worth a whopping $30 Million, making him the second richest Youtuber in the world.

Jeffree Star started out with a blog years ago.

This was a blog about beauty and lifestyle generally.

Over the years she also ventured into the music industry.

Later on in 2014, she started her own cosmetics brand.

As time went on, the channel grew and stood on its own as a separate body of income.

Today, Jeffree is said to be worth an eye-popping sum of $50 Million.

Final Thoughts on The Richest Youtubers In The World 2021

So far, these are the richest YouTubers in the world today.

You can see for yourself that YouTube has a very high earning potential.

From normal Google AdSense to sponsored ads and affiliate marketing, YouTube is a hub for easy earning.

All that is needed is to create a YouTube channel to get started.

As long as you have what to offer to the viewers, you can start your own YouTube channel today.

One good thing about starting a youtube channel is that it is actually free.

It’s as easy as that.

Like I have already said, as long as you have something to offer, you have nothing to worry about.

Feel free to share this with friends, and do not forget to air your opinion in the comment box below.