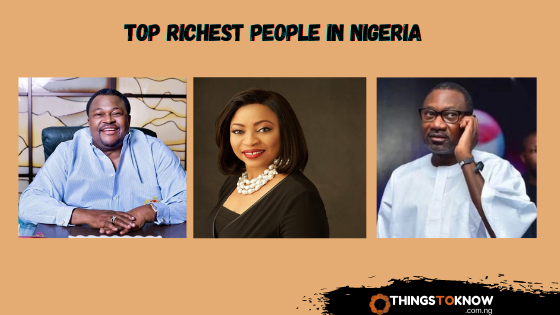 In this article, we are going to talk about the top 10 richest people in Nigeria and their net worth.

However, these people acquire their assets through hard work and consistency in the business industry.

Everyone knows how lucrative owning a business can be.

Nevertheless, the people we are going to review in this list are those who have taken their businesses and investments to a whole new level.

These guys make extraordinary wealth from their lucrative business ventures.

Nigerian billionaires can be found all over the list of richest people in Africa, and this is a strong signal that we are truly ‘the giant of Africa’.

Now, if you’ve been wondering who the top 10 richest people in Nigeria are, then make sure you read on.

Here, you will find a well-researched list of them all and how they make their cash.

Here are the top ten richest people in Nigeria

Dangote has been the richest man in both Nigeria and Africa for some years now.

With a net worth of about $12.1 Billion, he is also one of the richest men in the world too.

He is the CEO of the popular Dangote Group.

He has so many manufacturing factories, depots, and refineries all over Africa.

As a diverse businessman, Aliko Dangote is into the production of cement, salt, sugar, flour, and many other consumer goods.

He is a very influential person in Nigeria and a one-time Chairman of the Nigerian Stock Exchange.

Mike is a popular Nigerian business man who is into telecommunications.

He is the Ceo of Globacom (aka Glo), and his telecom company is the second-largest in Nigeria, after the popular MTN.

His company keeps growing by the day.

However, they now have a presence in so many African countries like Ghana, Cote de’ Voire, and the Benin Republic to mention a few.

Aside from owning a large telecom company.

Abdulsamad is the chairman and ceo of the BUA Group.

This is a company which handles a lot of work in the manufacturing, agriculture, and infrastructural industry.

He owns diverse businesses just like Aliko Dangote and is one of the richest men in Africa today.

He owns so many investments across the world and is currently the head of the BOI (Nigerian Bank of Industry).

With a net worth of $3.1 Billion, Rabiu sits safely at the number 3 spot in this list.

With a whopping net worth of $1.8 Billion, Femi Otedola sits on the 4th position in our list.

He owns the biggest stake in the popular oil company ‘Forte Oil’, which has several oil stations across Africa and their very own line of engine oil.

Femi is the father of the popular Nigerian disc jockey “DJ Cuppy”.

However, he often showers his son and daughters with expensive gifts and they always gain attraction from fans far and wide with their display of luxury.

Folorunsho Ajakija is the first woman in this list.

She is a Nigerian businesswoman with diverse investments in different fields, and she owns big stakes in many world-class companies both within and outside Africa.

Today, she heads the ‘Rose of Sharon Group’, and their businesses are spread across different industries through their subsidiaries.

With a whopping $1.2 Billion, Folorunsho sits firmly at the number six spot in the list of richest people in Nigeria

Dozie was the GMD of Diamond Bank Plc until 2019 when he launched his company Sparkle.

He is one of the richest Africans today, with a mind-blowing net worth of $1.1Billion.

It was said that at 19, Orji borrowed the sum of $35 from his mum and used this as a capital to start trading on rice, sugar, palm oil, and more.

By 20, he was already a millionaire who was into transportation, and manufacturing of furniture.

Today, Orji Uzor Kalu is the founder and ceo of Slok Holdings.

This is a diverse company that is into the fields of oil trading, shipping, and many more.

Before venturing into business as a young man, Orji was dropped out from a Nigerian University, on the grounds of fueling numerous student riots.

With a net worth of $1.1 Billion, he is one of the top 10 richest people in Nigeria today.

Jimoh Ibrahim is the CEO of the popular Global Fleet Group.

This is a big company which is headquartered here in Nigeria, with so many branches and subsidiaries far and wide across Africa.

He is a businessman, well known philanthropist, and a lawyer.

With a whopping net worth of $1 Billion, Jimoh is safely one of the richest people in Nigeria today.

The popular Nigerian entrepreneur and philanthropist ‘Tony Elumelu’ is one of the richest men in Nigeria today with a net worth of about $1 Billion.

He has so many investments spread far and wide across Africa.

Some of them are the popular UBA (United Bank of Africa), Transcorp, and Heir Holding.

As a philanthropist, he is the founder of the Tony Elumelu foundation, which empowers millions of new entrepreneurs all over Africa.

He was the brain behind the popularisation of the Standard Trust Bank.

He also expanded the United Bank of Africa from being a Nigerian bank to being a well-known African bank after the acquisition.

Tony is an alumnus of Harvard Business School in America.

This is literally the best business school in the world today.

As a successful businessman and economist, he holds several lucrative positions in several bodies and companies across the world.

Today, he is also a Global Advisory Board of the United Nations SE4ALL (Sustainable Energy For All Initiative).

He is very successful in the fields of health care, banking, management, business, and more.

With a net worth of about $1 Billion, he is one of the top 10 richest people in Nigeria.

Theophilus Danjuma is the only Military Personnel in this list.

He is a retired General in the Nigerian army, and also a businessman and philanthropist.

He is the chairperson of SAPETRO, which is an oil company with a presence all over Africa.

However, he had a very poor start in life as his father was a farmer and trader.

But along the line, things gradually became better.

Later, he studied History at the Nigerian College of Art, Science, and Technology in Zaria, which is now the Ahmadu Bello University.

After studies, he enrolled in the Nigerian Army through the Nigerian Defence Academy and retired as a General.

After his retirement from the Nigerian Army in 1979, he ventured into business.

Today, he is a billionaire in the industry.

He was the Chief of Staff to the former Nigerian president Olusegun Obasanjo while he was still the Head of State.

Conclusion of The Top 10 Richest People in Nigeria

From the list, you can confirm that these men all live big from the fortunes they have made in the business world.

If you are an aspiring business owner or investor, you can watch them closely to learn from their creative works.

They have made the country proud and they are all very influential in the business world today.