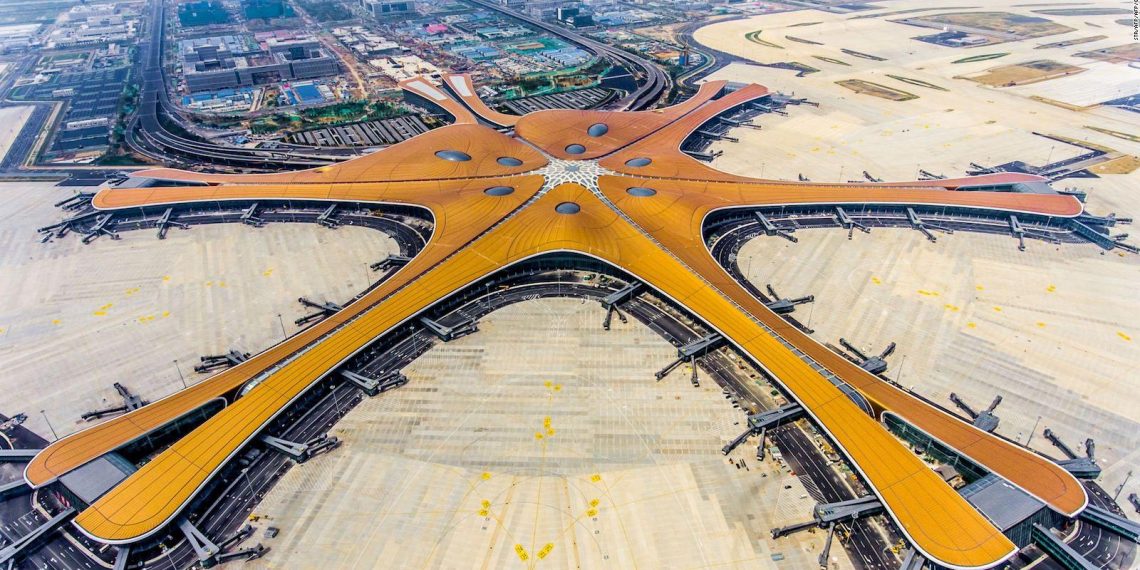 This photo taken on June 28, 2019 shows the terminal of the new Beijing Daxing International Airport. - Beijing is set to open an eye-catching multi-billion dollar airport resembling a massive shining starfish, to accommodate soaring air traffic in China and celebrate the Communist government's 70th anniversary in power. (Photo by STR / AFP) / China OUT / To go with China-Aviation, Focus by Patrick Baert (Photo credit should read STR/AFP/Getty Images)

Today, we will be looking at the 10 biggest Airports in the world.

Just recently, many people were able to travel again from one country to another after the Covid-19 disease outbreak.

The airports are the most common gateway to get from one country to another, for those who want to travel on air.

Aviation hubs provide the infrastructure for the aircraft, handle immigration issues, cargo and accommodate thousands of travelers every year.

Over the years, constantly growing passenger numbers made many airports overcrowded.

Since it has become difficult to squeeze all the travelers into one building and park all the airplanes into one place, countries started to enlarge their aviation hubs with new terminals and runways.

These are the largest airports that can accommodate thousands of travelers and land hundreds of airplanes daily.

Latest mega airports could make it feel like one is walking through an entire city.

Recommended for you Which Country Is The Richest In 2022

The airport serves as a hub to Saudia, SaudiGulf Airlines, and Flynas.

It is the international airport serving Dammam, Saudi Arabia.

The airport is located 31 kilometers northwest of downtown Dammam and is named after the former King of Saudi Arabia, Fahd ibn Abdulaziz.

The airport is a hub for United Airlines and Frontier Airlines, also a base for Southwest Airlines (LUV).

Denver Airport has one terminal, which is connected to three major midfield concourses A, B and C.

The airport has six runways and it is locally known as DIA, Denver International Airport is an international airport in the Western United States, primarily serving metropolitan Denver, Colorado, as well as the greater Front Range Urban Corridor.

Dallas/Fort Worth International Airport commenced its services in 1974 and has a major aviation hub for American Airlines (A1G) (AAL).

Terminal A is fully occupied by American Airlines (A1G) (AAL). The remaining terminals B, C, D, and E serve international and domestic flights.

The airport has a total of seven runways.

DFW Airport is the only airport in the world with four serviceable paved runways longer than 4,000 meters.

It is the primary international airport serving the Dallas Fort Worth metroplex area in the U.S state of Texas and the largest hub for American Airlines, which is headquartered near the airport.

The airport is the first and main hub for United Airlines.

The airport’s terminal complex consists of a main terminal and two midfield terminal buildings which are concourses A/B and C/D.

Also known as Dulles Airport, Washington Dulles or simply Dulles, it is an international airport in the United States, located in Loudoun County and Fairfax County in Virginia, 26 mile west of Downtown Washington DC.

This airport started its commercial services in 1981, Orlando airport is a major operating base 4 JetBlue (JBLU), Southwest Airlines (SUV), and Spirit Airlines (S64) (SAVE).

Orlando Airport features the main terminal which is divided into two terminals, A and B.

Each is connected to two article terminals, which operate internationally as well as domestic flights.

The airport has four runways.

It is a major public airport located 6 miles southeast of Downtown Orlando, Florida.

Beijing Daxing Airport, being 6th on the list of the biggest airports in the world terms of its area size, crowns itself as the biggest single-building airport in the world.

The airport was opened in 2019 and has become the main aviation hub for three major Chinese airlines which are Air China, China Southern Airlines (ZNH), and China Eastern Airlines (CIAH) (CEA).

Daxing Airport has only one terminal.

However, the terminal is the largest single building terminal in the world, having five concourses and looking like a sky starfish that has four runways.

It is a large international airport located on the border of Beijing and Langfang, Hebei Province.

It has been nicknamed the ‘starfish’.

In preparation for the 2008 Olympics, the city of Beijing constructed a massive Terminal 3, one of the biggest in the world.

The airport is home to China’s Air which flies to more than one hundred and twenty destinations.

It is the latest addition to the list of supersized airports.

It cost a staggering eleven billion dollars to build.

This airport is Beijing’s second international renounced and it’s expected to also become the world’s busiest, with a hundred million passengers passing through by 2040.

Its solar panels, waste heat recovery, and water management systems limit the environmental impact that such a big airport can make on the ecosystem in the area.

While its still early days for Beijing Daxing Airport, they have big plans for the future.

Firstly named Houston Intercontinental Airport, the airport was opened in 1969.

The airport currently serves as the second-largest aviation hub for United Airlines.

Terminals A, B, C, D, and E serve both domestic and international operations with five runways.

It is located in Houston, Texas, United States, under class B airspace, serving the Greater Houston metropolitan area.

The airport began commercial services in 1999.

A third terminal has been planned since 2015, in addition to a satellite terminal and two more runways.

The airport currently has four runways.

Shanghai Pudong International Airport is one of the two international airports in Shanghai and a major aviation hub of East Asia.

The airport is operated by Shanghai Airport Authority.

It is also the hub for privately owned Juneyao Airlines and Spring Airlines, and an Asia Pacific cargo hub for FedEx, UPS, and DHL.

The DHL hub, which opened in July 2012, is reportedly the biggest express hub in Asia.

The main purpose of the SFT Terminal was to ease operational strains on the existing terminals during pilgrim seasons. However, the airport has two runways.

It is the principal international airport of Cairo and the busiest airport in Egypt and serves as the primary hub for EgyptAir and Nile Air as well as several other airlines.

The airport has two parallel runways.

It is also known unofficially as Bangkok Airport is one of two international airports serving Bangkok, Thailand.

The other one is Don Mueang International Airport, which was the main international airport from 1926 to 006 and transitioned in 2007 to become a low-cost airline hub for Bangkok.