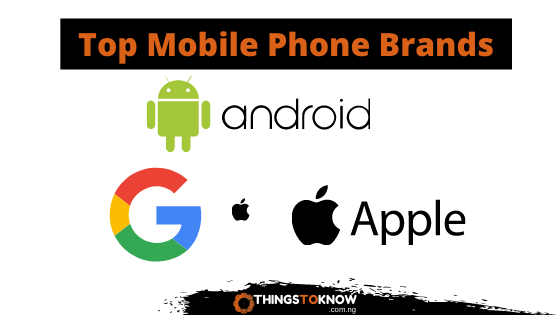 In this article, we will take a critical look at the top mobile phone brands in the world

There has been a huge evolution in the world of technology.

Mobile phones are now easier to operate, faster to use, and very durable.

They are also used for countless reasons; to receive phone calls, to send a text message, to have a video call session, mobile banking, social media, and other stuff.

It is one of the technologies most people cannot do without.

One may think one mobile phone is the same as another but different brands of mobile phones have their specifications, uniqueness, battery capacity, storage capacity, or durability.

This is to say no two phones are the same, even if it is from the same brand.

Whether one wants to buy a new phone or just wants to have a knowledge of the best brands of mobile phone out there.

This article lists the top 10 mobile phone brands in the world as of 2021:

Fully registered as Lenovo Group Limited but known as Lenovo, it is a Chinese-based multinational company.

The company manufactures and sells things such as personal computers, electronic storage devices, tablets, smartphones, and so many more.

Even though they sell a lot of their smartphone models nationwide, they are not really popular when it comes to participation in buying their phones.

The Life’s Good company, formerly known as Lucky-Goldstar, is a South Korean-based multinational.

It is the fourth largest in that country.

But also has entered the line of producing their very own phone brand.

Although, it did not achieve widespread recognition in many countries.

Nokia began as the foremost mobile brand in the world but as technology evolved and new smartphone brands emerged.

With that, Nokia lost its market value.

They make about 17.5 million on sales of phones alone.

Motorola was owned by an American multinational telecommunications company that was founded in 1928.

It had to be divided into two independent companies after losing $4.3 billion between the years of 2007 and 2009.

It now became Motorola Mobility, which was one of the companies, and Motorola Solutions, the other company, in 2011.

Their annual sales are above 36 million dollars.

Motorola’s latest release is the Motorola One 5G Ace which was launched on the 8th of January 2021.

Some of their phone models have sensors such as fingerprint sensors, proximity sensors, accelerometers, and ambient light sensors.

This phone brand is also a subsidiary of the Guangdong China-based electronics and phone brand, alongside Oppo.

This phone company is known in India and they manufacture low-cost to mid-range phones.

The most recent release dips their Y51A smartphone which was launched on the 11th of January, 2021.

Some of their phones have sensors that include a compass magnetometer, fingerprint, accelerometer, Proximity sensor, a gyroscope and an ambient light sensor.

Back then, it was known for its development of blu-ray players, smartphones, and other electronics.

The company designs develop and sell smartphones and other electronics such as tablets, air purifiers, fitness trackers, and  TVs.

It is usually sold in India via flash sales.

Their mobile brand has something they use to call “skin” which is MIUI.

Their latest release is the Redmi 9T which was launched on January 8th, 2021.

This is a China-based brand that started in 1997.

It has the world’s biggest builder of telecommunications infrastructure.

They also produce phones, smartwatches, and tablets, A smartwatch was made for Android users to use.

This popular phone brand was founded by Steve Jobs and two others named  Ronald Wayne and Steve Wozniak, in 1976.

The company is headquartered in Cupertino, California.

It all started in a workshop and it only produced laptops, personal computers, and media players.

It was in 2007 that the band released its first iPhone while the first iPad was released in 2010.

The first Apple watch was released in 2014.

All iPhones use the same operating system called iOS.

The company generated about 33.36 billion US dollars from the 2019 iPhone sales.

Apple phones are best known for their ultimate quality cameras.

Coming at top of the list is the Samsung brand.

It is a South Korea-based company and it started back in 1969 with the name Samsung Electric Industries.

They also make other electronics such as televisions and semiconductors.

When it comes to producing the best smartphones in the smartphone market world, Samsung is one of the world’s biggest.

In the whole of Europe, Samsung remains at the top of the list of best-selling phones.

Samsung is a very reliable brand with accuracy, good performance and it is also cost-efficient.

The smartphone models that they have produced are;

Samsung phones are known best for their ultimate battery capacity and performance.

Conclusion on The Top 10 Mobile Phone Brands In The World

The world of smartphones still keeps on growing every day.

Mobile phones are now gadgets that almost everyone in the world has.

Smartphones keep growing day by day to keep up with the trend and likes of their users.

There are many other phone brands that are yet to come into the light.

But these are the most popular mobile phone brands in the world and they are widely used by many.