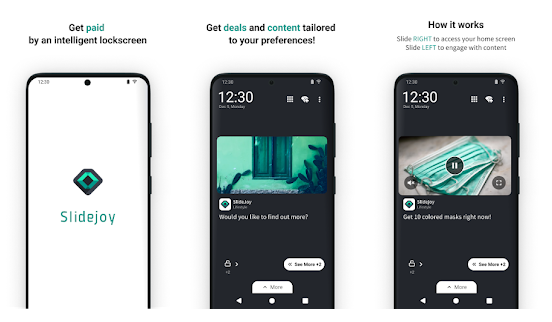 Are you look for money-earning apps on the internet that can help you make an additional income?

Making and earning money has been made so easy.

No more does a person have to actually be in an organization working but now the person can work right from home and just through applications.

Although these apps can not guarantee riches, it is still useful for those who need money for a few certain things.

Here is a list of the top 10 money earning apps on the internet right now.

The iPoll Application is available for both iOS and Android users.

It is a market research app that was created to make its users earn money through taking market surveys, completing missions around retail, and writing down dairies.

While a new user is registering, some basic questions such as their consumer habits and preferences are asked.

The reason is for the application to determine which missions are to be given to the person based on preference and location.

The uniqueness of this market research application is that is customized to suit each user’s interests.

Therefore alerts are sent to its users notifying them when there is a new task or mission, which is usually based on what they would like.

When a mission, survey, or diary is completed, the user can earn cash rewards that can be gotten through gift cards or through PayPal.

The only thing is that the minimum withdrawal is $10.

But each user is automatically entered in a quarterly sweepstake that gives out $10,000 in cash to its winners.

The Money App is available to both iOS and Android users.

The rewards earned can be added for a long period of time and withdrawn using a PayPal account.

The uniqueness of this app is the quick payment.

Payment is done within two to three Woking days after the cash has been asked for a withdrawal.

Most market research apps only pay once a month so this is a really unique thing.

The application has a score of 4.8 out of 5 on both iOS and Android iTunes and Google Play respectively.

Moreover, this app happens to be the second best money earning app in the internet.

The app is available on both iOS and Android for download.

However, this market research application lets its users gain points by playing games, shopping online, or through surveys.

More points can also be earned by watching videos.

Some of these opportunities for earning money are available to certain demographics so a user may be disqualified from participating in some due to his or her demographic.

The minimum withdrawal is $25 which is equivalent to 2,500 Swagbucks points.

This application has been given 4 out of 5 stars on both iTunes and Google Play.

What the Fluid Market App does is allow its users to rent out any old or abandoned vehicle.

Such vehicles like cars, cargo vans, box trucks, SUVs, pickup trucks, and many others.

Their services range from hours, days or weeks to those in need of them.

Moreover, the application is available on both iOS and Android for download.

In order words, the company website claims that its users can earn up to $24,000 per year just by renting out their unused vehicles.

Not only vehicles can be rented out on this app.

But also tools like saws, hedge trimmers, drills and other stuff such as rowboat, bike, platform shoes and many more.

The user gets cash for it.

Besides, the system has been made to be so convenient in such a way that the rentee can be absent when his or her car is being rented out.

The Foap App is a money-earning app that involves selling photos taken by smartphones and earning extra money.

The photographs do not have to be taken by professionals only but amateurs can also join in in the money-earning adventure.

However, the application is available on both iOS and Android for download.

In order words, the application allows brands, advertising, and marketing agencies to search for and purchase images.

Foap’s has resources of more than 2.5 million photographers all over the world.

It is a crowdsourcing platform.

Once the user registers, the user can upload their photos with tags and get the photos rated by the community.

The number of ratings determines how much the user will earn.

Brands and agencies can request specific photos and also videos too.

The bookscouter app is available on both iOS and Android for download.

It is an app that allows its users to earn money by selling both old and new books to other people, whether registered users of the same app or just random people.

Once registration has been done using e-mail or through any social media platform.

Scanning of book barcodes can be done and prices from book buyers begin with the buyer paying the highest at the top.

The shipping is totally free.

The only problem is some books do not provide the prices immediately after scanning the barcodes.

Slidejoy is available for download on only Google Play.

The application allows users to view many adverts featuring news or advertisers on one’s lock screen.

The thing that is good about this app is that money can be earned whether or not the user decides to look through the advert.

Money can be earned just by unlocking the phone. Surveys can be done to earn more on the application.

Payments can be chosen between PayPal or Square Cash or can be donated to charity.

The only disadvantage is that after registering, the user has to have spent a period of three months before being able to withdraw any cash but after that, payments are done monthly.

The Userfeel Application is available on both iOS and Android for download.

The application lets its users participate in various usability tests.

This means that its users get paid just for exploring new websites, doing few things on the website and offering recorded feedback and criticisms.

Each task lasts for about 10 to 20 minutes and a sum of $10 is paid for a test in cash through PayPal or Payoneer.

A unique feature about the app is what is called the qualifications test in which a voice recording is done while a task is being done by the user.

This is to guide the user through the task on how to do it.

It is an unpaid feature of the application.

It is only meant to test if the app is working properly and also give the Userfeel team a rating and feedback.

If the raging given is a good one, more tasks will be assigned to such users.

The app has a rating of 3.2 stars out of 5 by its users on Google Play.

Toluna is a market research application that is available to both iOS and Android for download.

It is unique because its users can get paid through PayPal which other market research apps do not provide.

Rewards are earned by taking surveys or creating surveys.

The registration is straightforward and the app is easy to use.

The Musely Application is available on both iOS and Android for download.

It is a marketplace based app and is also an online community for beauty and home products.

It is also a social platform for women to get and receive tips and advice on a healthy lifestyle from skin care tips to fitness tips to parenting tips.

There is also a place to shop for new brands, organic brands, and products that are eco-friendly such as lipsticks or nail polishes.

One can earn on this app by being an influencer on the site where each referral is paid for which is a 20 percent commission on all sales.

The app pays on the 1st and 15th of every month.

Conclusion on The Top 10 Money Earning Apps on The Internet.

These applications have easy ways of earning money by doing certain tasks and some, not even doing any at all.

Hope you love the top 10 money-earning apps on the internet and will give them a try.

Can’t wait to read your own opinion in the comment section.