The Highest Mountain In The World 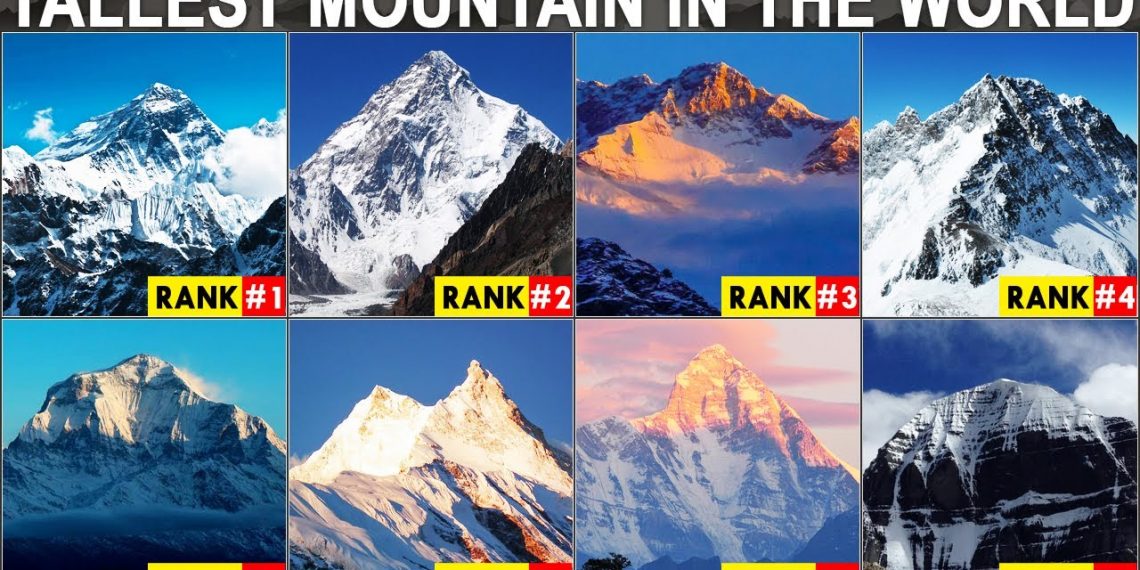 So what is the name of the highest mountain in the world?

What is it that actually made it the highest mountain in the world?

This and many more you will find out in this wonderful article.

As we all know, there are mountains in almost every part of the world.

This is a natural blessing given to man by God.

Mountains add a lot of beauty to nature, and they play a very vital role.

There are over 109 mountains in the world with elevations that are higher than 7,200 meters above sea level.

The majority of these mountains are actually located around the Indian and Eurasian plates.

In this article, we will look at the highest mountain in the world, as well as other wonderful facts which you need to know.

Without taking any more of your time, let us get down to the question.

What is the name of the highest mountain in the world?

Before going further, we have to look at a few things.

The tallest mountains above sea level are usually not the highest above the surrounding terrain.

There is actually no specific definition of their surrounding base.

However, mountains like Mount Kilimanjaro, Denali, and Nanga Parbat are worthy candidates for the highest mountains on land using this measure.

The actual bases of island mountains are below sea level.

If this is considered, Mauna Kea and Volcano would be the highest mountains.

Although all these mountains make it to top spots when certain things are considered.

None of them is actually the highest mountain in the world.

So what is the name of the highest mountain in the world above sea level?

The name of the highest mountain in the world is ‘Mount Everest’.

Have you ever heard of this mountain?

If you’ve not, then this article is a good starting point for you.

Located on the border between Province 1 of Nepal and the Tibet Autonomous Region of China.

Mount Everest is the highest mountain in the world.

The border between Nepal and China actually runs across the summit of this mountain.

With such a height, this mountain is indeed a tourist site.

Mount Everest is one of the mountains that attract climbers from different parts of the world.

Many of these climbers are world renowned mountaineers.

There are actually two major climbing paths on Mount Everest.

One approaches the summit from the South-East of Nepal, while the other is from the North in Tibet.

The route which actually approaches the summit from southeast Nepal is said to be the standard route.

Climbing from the standard route doesn’t actually pose too much technical danger.

However, the other routes to the summit of Mount Everest present a couple of dangers like wind, weather, and altitude sickness.

There could also be dangers from Icefall and more.

Many of these bodies still remain unfound on this mountain.

The first move that was made to reach the top of Mount Everest was made by British Mountaineers.

During this period, Nepal did not permit foreigners into their country.

As a result, the British mountaineers had to make several attempts from the Northern route which was actually in Tibet.

The British mountaineers later embarked on a reconnaissance mission in 1921.

After this, another expedition was carried out in 1922.

It was said that seven porters lost their lives in an avalanche while they descended from the Northern route.

The expedition which took place in 1924 actually became one of the greatest Mysteries that ever occurred on Everest.

However, they never returned from their trip.

There was actually a lot of debate that they were the first people to reach the top.

It was said that they were spotted high up the mountain before they disappeared into the clouds.

As a result, a lot of people concluded that they reached the top of the mountain.

Edmund Hillary and Tenzing Norgay were the first mountaineers who made an official trip up Everest from the South-East route in Nepal.

A team of Chinese mountaineers: Wang Fuzhou, Qu Yinhua, and Gonpo were the first to ascend to the peak from the Northern route.

This actually took place back in 1960.

Back in October 2005, the Chinese Academy of Sciences and State Bureau of Surveying and Mapping came up with results from their calculations.

They further claimed that this was the most accurate measurement yet.

This height is actually based on the rock, rather than the ice toppings.

They discovered an ice depth of 11ft, which actually raises its height to 8,848m.

Later on, there was a disagreement between Nepal and China.

They argued as to whether the main height of the mountain should be based on the rock height or the snow height.

However, they soon came to terms, and both countries agreed that the height of the mountain would be based on the ice height which is 8,848m high.

After the settlement of their disagreement in 2010.

Nepal then accepted the Chinese research which claimed that the rock height was actually 8,844m high.

As the highest mountain in the world, a lot of mountaineers try to climb Mount Everest.

However, we will look at some notable climbs in this section of the article.

This was done by George Finch and Captain Geoffrey Bruce.

First official ascent by Edmund Hillary and Tenzing Norgay on the British Expedition to Mount Everest in 1953.

First ever reported climb from the North Ridge.

This was done by Gonpo, Wang Fuzhou, and Qu Yinhua.

They were all Chinese mountaineers.

This was done by Reinhold Messner and Peter Habeler.

This was carried out by Japanese, Chinese and Nepali teams.

These teams ascended the peak of the mountain simultaneously from different angles, and descended down to the other sides.

This was also the first that was recorded on a live television broadcast.

Still in 1988, Jean-Marc Bolvin became the first ascent by paraglider.

The last and final record of 1988 was made when Kazi Sherpa became the fastest to reach the summit via the south-east ridge.

He actually did this without oxygen, and he reached the summit in 20 hours, 24 minutes.

Still in 2001, Lhakpa Sherpa became the first Nepali woman to reach the top of Everest and survive.

Pemba Dorke became the fastest to reach the summit through the south Col without oxygen (8 hours, 10 minutes).

Lhakpa Sherpa reached the top of Mount Everest for the sixth time.

This made her the most successful female climber of Mount Everest.

Christian Stangul became the fastest to reach the top through the north-east ridge without oxygen.

Jordan Romero became the youngest person to reach the top of Mount Everest.

He was only 13 years old when he reached the summit.

Apa Sherpa bagged the record for most times to reach the top of Mount Everest (21 times between 1990 to 2011).

Melissa Arnot reached the top of Everest for the fifth time, breaking her own record for the most successful summits by a non-Sherpa female.

Malavath Purna became the youngest female to reach the top of Mount Everest.

She was only 13 years and 11 months old when she reached the summit.

Kami Rita Sherpa of the Alpine Ascents made her 21st ascent to the summit.

Kami Rita Sherpa broke her own record to reach 24 ascents to the summit.

These are some major climbing records on Mount Everest.

Conclusion On The Highest Mountain In The World

From this informative article, you can see that Mount Everest is indeed a historical mountain.

A lot of lives have been lost on this mountain.

However, a lot of fresh mountaineers keep trooping to this mountain to create their own records.

So far, that will be all we have on Mount Everest.

If you actually found this article useful or interesting, then feel free to drop your comments below.