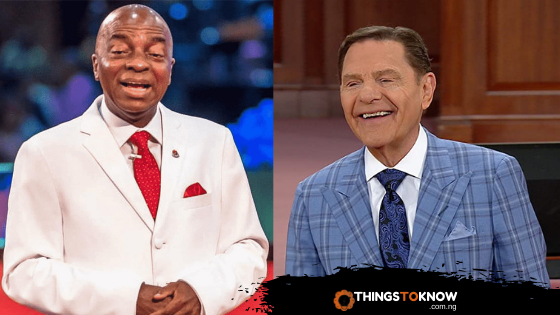 Who is the richest pastors in the world?

In this piece, you will find out 10 of the richest Pastors in the world.

We all know that Pastors are people who lead religious congregations and guide people to achieve spiritual excellence in God.

In terms of cash, the pastoring field has proven to a very profiting one for so many.

Pastors are generally not materialistic people.

However, with so much cash flowing in today, so many men of God tend to acquire these worldly things for their earthly comfort.

Today, so many rich Pastors won their own private jets, luxury cars, mansions, yachts, and many more.

A lot of people blast these men of God for their display of wealth.

This is on the basis that they ought not to possess too many material things as men of God.

So, if you’ve ever wondered about the richest Pastors in the world, then here is a comprehensive list of them all.

Now let get to know who are those richest pastors in the world and what are their net worth.

Here are the richest pastors in the world

Pastor Enoch Adejare Adeboye is one of the most popular men of God in the world today.

He is the Head of the popular Redeemed Christian Church of God, popularly abbreviated as RCCG.

Aside from his natural gift of preaching and prayer, Adeboye is a very simple man of God who is humbled to the core.

However, he has a little taste of luxury.

He is one of the few Nigerian Pastors who a personal plane, mansions, and several luxury SUVs.

Before he was appointed as the overseer of the Redeemed Christian Church of God, he was a professor of mathematics in a popular Nigerian University.

Pastor Enoch A. Adebayo is currently estimated to worth $39million dollars, earning him the number ten spot in the list of the richest pastors in the world.

Joel Osteen is an American pastor and evangelist, who was born on the 5th of November 1963.

He currently heads the Lakewood Church, based in Texas.

The Church initially belonged to his father, but when he died, Osteen took over as the overseer.

Today, Joel Osteen has improved and expanded his father’s congregation of about over 5,000 people, to a massive crowd of over 40,000 people.

Aside from running the church business, Osteen is also a very good author, who has written so many wonderful books on several topics like healing, prayer, and more.

His pioneer book which was titled ‘Your Best Life Now‘, was a New York Bestseller.

Osteen owns a private jet and he lives in a multi-million dollar mansion with his lovely wife and kids.

As we speak, Osteen is currently worth $40million dollars.

Benny is a rich and powerful pastor from Israel who is popularly known all around the globe.

He started evangelizing and performing miracles through the Orlando Christian Centre, and then he later started to conduct healing seminars to huge crowds.

As a pastor, his preaching are often broadcasted on the ‘Trinity Broadcasting Network (TBN)’.

Benny is also a world-renowned author who has published several Christian books that are being purchased worldwide.

Though he has been entangled in numerous major controversies with the US government in the past.

His followers still have complete faith in him.

Hinn owns a Gulf stream G4 private plane and is currently estimated to have a net worth of $41million dollars.

On the seventh place in this list is the well known Nigerian born pastor and international preacher Chris Oyakhilome.

He is the founder and General overseer of the popular Christ Embassy church, which is originally known as the Believers Loveworld.

However, he ventured into the pastoral line way back in the University and has developed ever since.

He owns about 3 TV channels through which his teachings are aired to the world.

Popular gospel artists like Sinach, Frank Edwards, and a lot of others are all members of his church who rose to the limelight through his choir.

There are several branches of his church spread across all nations worldwide.

There are millions of people who learn from his teachings.

In sixth place, we have pastor Uebert Angel of Zimbabwe.

He is an international pastor who is the first to set up a millionaire academy where he helps people with their businesses by offering top quality mentoring services to them.

He started his church with the name ‘Spirit Embassy‘.

However, this name was changed to ‘Good News Church‘ at a later time.

He is currently the chief executive officer of the Angel organization.

Uebert owns so many luxury cars and he lives in a multi-million dollar mansion.

He is worth a whooping $6 million dollars.

Pat Robertson is an American pastor who is a native of Virginia in the United States of America.

He is one of the most popular men of God in the world today.

Back in the year 1960, Pat started the popular CBN (Christian Broadcasting Network) which airs the popular Christian program titled ‘700 clubs’.

He is the anchor of this show and it is aired in over 180 countries of the world and in close to a hundred languages.

He is the founder of Regent University and he is currently the Chancellor of the school.

Amongst several other investments, Pat also has a legal company in Washington D.C.

In the year 1988, he contested for the US presidential seat but could not win the elections.

After his failure in politics, he created a Christian organization called the ‘Christian Coalition’.

The aim of this organization was to raise funds for potential aspirants in the political fields.

With so many investments here and there, Pat Robertson is currently worth the sum of $100million dollars.

Ayo Oritsejafor popularly known as Papa Ayo is a Nigerian-born pastor and founder of the Word of Life Bible Church.

However, the church is based here in Nigeria.

He is a senior minister all around the world and was the former president of both the Pentecostal Fellowship of Nigeria and the Christian Association of Nigeria (CAN).

His sermons and services are aired all through Africa and over 70 countries of the world through the Christian television channel.

With a net worth of $120million dollars, Papa Ayo sits firmly on the 4th position in this list.

Bishop T. D Jakes is an American pastor who was born in 1957, in West Virginia, USA.

There are rumors that he has a linkage with one of the Western States in Nigeria but it is not yet clear enough for a proper conclusion.

Jakes is the founder of the popular ‘Potters Hoise’.

With a capacity of over 30,000 members, his church is one of the most popular churches in the whole of Dallas, Texas.

His messages are broadcasted on major TV stations, and most of his Christian books are world bestsellers.

TD Jakes is a man of God who also fancies luxury.

He owns a beautiful mansion that is said to cost about $2million dollars, and he owns a private jet, amongst several other luxury cars.

As of today, Bishop TD Jakes is worth an eye-popping $148million dollars.

He also owns a few colleges and a university.

Oyedepo is the only pastor in the world who is said to have up to four private jets.

He also owns different mansions both in the USA and other major countries of the world.

With a net worth of $150million dollars, Oyedepo is one of the richest Pastors in the world today.

Kenneth Copland is the richest pastor in the World at the time of this publication.

At number one spot in this list of richest Pastors in the world, we have none other than the popular Kenneth Copeland.

He’s the Ceo and general overseer of the Kenneth Copeland Ministry.

This church is built on land owned by Kenneth and it is said to be up to about 1,500 acres in space.

Aside from running the pulpit services, Kenneth also anchors on his own Christian show titled ‘Believers Voice of Victory’.

This wonderful program is broadcasted through different mediums like podcasts, TV stations, radio stations, and more.

Aside from being a minister of God, Kenneth is a musician, and he still sells some of his music albums today.

His mansion is said to be worth over $6million dollars, and he is currently said to worth a mind-blowing sum of $350million dollars.

Final Word on The Richest Pastors in The World

From the above list, I believe you are now aware of the richest pastors in the world and their massive net worths.

This is a list that reveals to us, how much money some pastors have earned in the much underrated pastoral field.

I hope you found this article interesting…