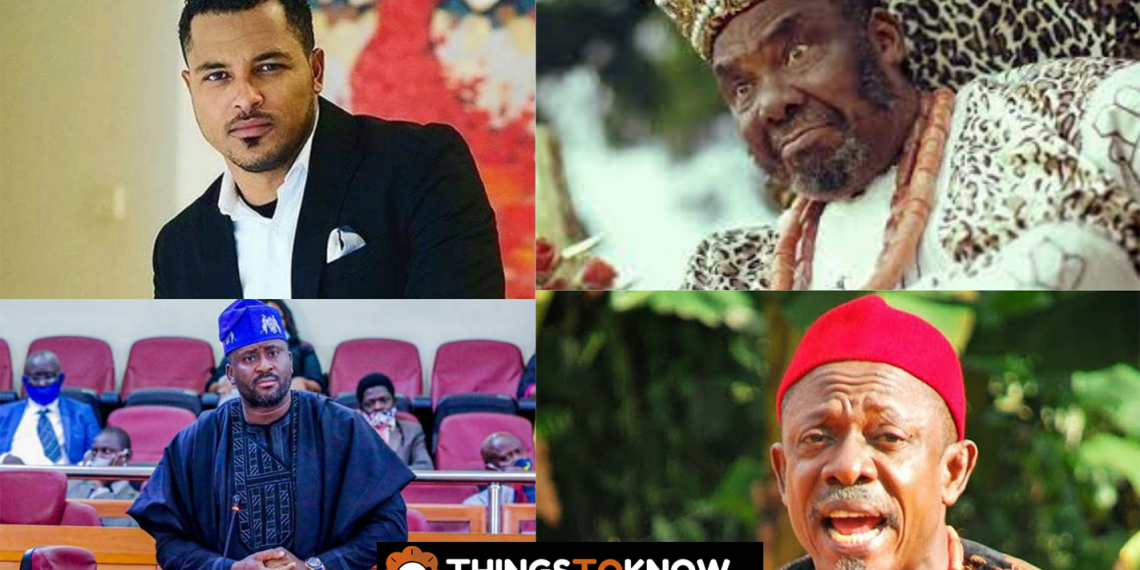 The Nigerian film industry has seen the rise of many great actors and this Top 10 Best Nollywood Actors of All Times is an attempt to document the story of some of these great actors.

Please note that this list is in no particular order but these are some of the finest actors to have passed through the industry.

Here’s the Top 10 Best Nollywood Actors of All Times:

Born Desmond Oluwashola Elliot, he has risen to become one of the best Nollywood actors of all times.

He was born on February 4, 1974, to a mother from the Southern part of Nigeria and to a father from the Western region of the country.

Desmond Elliot has been featured in over 200 movies since the commencement of his career.

He was also nominated for best supporting actor at the 10th Africa Movie Academy Awards.

Desmond Elliot is also a politican and a director in the film industry.

There’s an excitement that comes with watching a Nollywood film and seeing RMD in it. I remember the poise that RMD portrays that gets us glued to our TV sets back in the day. And truth is that he still has it.

Richard Mofe Damijo was  born on July 6, 1961. He was born in Aladja Delta State. He’s a legendary Nigerian actor, writer, producer and lawyer.

RMD is also one of the few Nigerian actors to have a thing in politics. He is a former Commissioner for Culture and Tourism in Delta State.

In 2005, he won the Africa Movie Academy Award in the category of ‘Best Actor in a Leading Role’.

He is popularly known for playing Mr. Andy Okeke in Living in Bondage. Kenneth is one of the beloved Nollywood actors that have blessed our screens.

His interpretation of roles are beautiful and he’s one of the finest actors to have passed through the industry.

He has received a number of recognitions and awards including a special recognition award by the organizers of City People Entertainment Awards for his contributions to the entertainment industry.

Son to the phenomenal Nollywood actor Pete Edochie, Yul didn’t walk in the shadow of his father, he has made a name for himself.

He was born on January 7, 1982 in Lagos, Nigeria. Yul is from Anambra State and grew up in Lagos and Enugu State. Yul got married when he was 22 and currently has 4 children.

He obtained a Bachelor of Arts degree in Dramatic Arts from the University of Port Harcourt.

Yul Edochie joined the movie industry in 2005 and got his first major break in 2007.

He’s an inspiration to many young and aspiring actors in Nigeria.

Vicker is a Ghanaian actor, movie director and a humanitarian. His breakthrough into Nollywood gave him a place amongst Nigerians.

Even till date there are many Nigerian fans of Van Vicker who are yet to know that the actor is a Ghanaian. His Dad died when he was six and since then he has been very close to his mother and calls her his hero.

Van Vicker started his career as a radio presenter and later appeared in the Ghanaian television series Sun City. This series is how many people got to know about him.

He has starred in so many movies alongside other great names in the industry like Jackie Appiah, Mercy Johnson, Majid and Michael.

Ramsey Nuoah is regarded as one of the industry’s fine boys. He made his debut into the film industry in the early 90s and since then he has been performing remarkably in the industry.

Ramsey Nouah was born in Lagos on December 19, 1970. His father is an Israeli while his mother is a Nigerian. He grew up in Lagos and attended school there.

He has starred in many movies and functions in different capacities in the industry. Ramsey Nouah is an actor and a director. He directed Living In Bondage: Breaking Free (2019).

He has won awards and received recognitions for his contributions to the industry.

Modestus Onyekwere popularly known as Kanayo O. Kanayo is a Nigerian actor and also a lawyer.

Kanayo made his first public appearance in the industry in 1992 when he appeared in the film Living in Bondage.

He has won awards and recognitions for his contribution to the Nigerian movie industry.

Ezeruonye is one of Nigeria’s finest actors. He just had to be in our list of ‘Top 10 Best Nollywood Actors Of All Times’.

He has starred and featured in a lot of movies including Occultic Kingdom, Ropes of Fate, and Unforgivable.

Mike is from Abia State, Nigeria and was born on September 21, 1982 in Lagos. Before becoming an actor, he worked as a banker.

He has received a couple of award nominations including a nomination for Best Actor in Africa Magic Viewers Choice Awards.

Nkem Owoh is a Nigerian actor and comedian. He is one of Nollywood’s actors that will make you laugh your heart out whenever he appears in a movie.

Popular movies that he starred in include Osuofia In London(Part 1 & 2), Spanner Goes to Jail, and A Fool at 40.

Osuofia studied engineeering, but started his acting career while in school. He won the African Movie Academy Award for Best Actor in a Leading Role in 2008.

Our list of Top 10 Nollywood Actors of All Times won’t be complete without mentioning this legend.

Pete Edochie came into limelight when he played the role of Okonkwo in an NTA adaptation of Chinua Achebe’s Things Fall Apart. This happened in 1980.

He is currently 70 and has spent over three decades in the industry with many awards, honors and accolades to his name.

Recommended: Top 10 Richest Actors In Nigeria and their Networth (2021)