30+ benefits of Ginger and Garlic for men and women

by Andrew Effiong
in Health 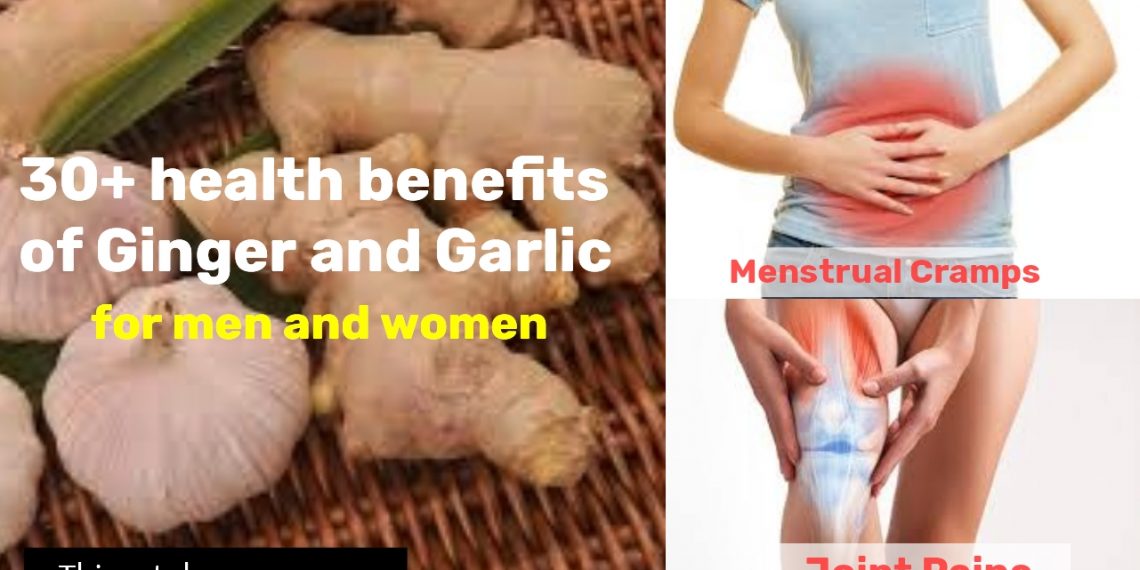 0
SHARES
939
VIEWS
Share on FacebookShare on TwitterShare on Whatsapp

Ginger and garlic are two of the most well-known spices in the world. For centuries, people use them as natural remedies to treat common ailments such as nausea, vomiting, and motion sickness.

Although Ginger and garlic are both an integral part of many cultural dishes around the world. In some places, people often underratd these two substances and some view them as mere spices for food seasonings.

Ginger and garlic are both common ingredients in many recipes. Ginger is commonly used to season food, while garlic is often used to add flavor and aroma.

However, these two spices do so much more than just make your food taste better! Multiple studies and research has proven Ginger to have a number of health benefits, ranging from helping with digestion and nausea to boosting the immune system.

For example, Ginger contains antioxidants which help fight inflammation and ward off disease. On the other hand, Garlic has similar health benefits as ginger does. It is best known for its ability to lower blood pressure because allicin (one of the main components) dilates blood vessels making them less resistant.

20 health benefits of ginger and garlic

Ginger’s health benefits are due to the rich antioxidant properties found in gingerols (active compounds), which can be boiled or baked into foods like pumpkin bread, apple sauce cake.

Meanwhile, Ginger is a flavorful root that helps to stimulate the circulation of blood, which in turn can help to reduce inflammation. Garlic is a pungent vegetable that ancient Asians use in traditional medicine for centuries as an antibiotic, antiseptic and culinary spice.

For the heart and blood vessels

For the immune system

Studies have shown that both Ginger and garlic can significantly reduce pain from menstrual cramps, morning sickness during pregnancy, fibromyalgia pain (a long-term condition involving chronic muscle and joint pain) and even help to alleviate the symptoms of colitis.

Another study at Tufts University in Boston find ginger to lower blood sugar levels in people with type two diabetes. Ginger is an anticoagulant which means it thins the blood and helps prevent heart attacks or strokes as well as being able to promote blood circulation. Ginger also has anti-inflammatory properties which means it can help to reduce the symptoms of inflammatory diseases such as rheumatoid arthritis, osteoarthritis and ulcerative colitis.

10 health benefits of ginger to the body

How to make ginger and garlic tea

Ginger and garlic tea can both serve as a medicine and enjoyed as the perfect drink for colds. Ginger and garlic tea is a very popular type of drink that ancient Chinese and Indians utilise in the treatment of various sicknesses, including nausea and vomiting. It also helps relieve symptoms of morning sickness during pregnancy by balancing levels of hormones such as progesterone or estrogen.

Drink this tea as often as needed, but no more than three cups per day. People also do prefer to consume raw ginger and garlic too.

CONCLUSION: Ginger and garlic tea is an effective way to keep hormones in balance. Ginger has many other benefits too, so it’s not just about the ginger and garlic!

Benefits of Ginger and Garlic for women

Benefits of ginger and garlic for men

The following are just some of the many different ways how ginger and garlic benefits for men:

Ginger has been found to have a strengthening effect on the immune system making it an excellent choice for allergy sufferers.

For general well-being, ginger can provide relief from tension headaches by increasing circulation

It’s believed to enhance libido in both men and women because it increases blood flow which stimulates sexual desire. An increased sex drive will not only increase pleasure during intimacy but improve overall health as well

Some people believe that Ginger aids digestion due to its natural ability to break down food faster and fight bacterial infections.

Sometimes you can add lemon to the ginger and garlic mixture to add a little more taste. Ginger, garlic and lemon mixtures are known to be some of the most healthy herbal remedies for people throughout history.

When you add lemon to ginger and garlic, it cleanse the liver and it could even help with weight loss.

This drink can also reduce inflammation as both combinations are anti-inflammatory substances. Ginger can help heal ulcers and it is a good choice for people who suffer from stomach pain.

The truth is that, lemon has it own benefits to the body and when you combine it to ginger and garlic, you are indeed multiplying those benefits.

Ginger, garlic, and onions mixture has a high preventative effects on cancer cells in the body

The benefits are numerous when it comes to this Ginger Garlic And Onion Mixture Recipe!