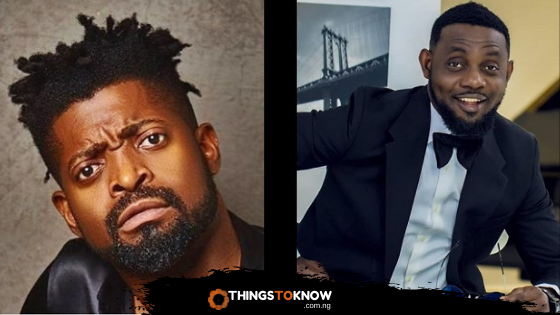 If you are looking for the top 10 Funniest Comedians in Nigeria 2021, then you are reading the right post.

Honestly, we all have that moment when these wonderful comedians uplift our dull spirits, and make us laugh away our sorrows all with their wonderful jokes.

Cracking a successful joke is not an easy task, but with these born comedians.

We are so lucky to receive a rapid flow of jokes, comedy skits, and more for us to explore on a daily basis.

There are thousands or should I say millions of humorists in Nigeria.

But here, we shall review just ten of the funniest comedians in Nigeria as at 2020.

These comedians have made it big both within and outside Nigeria.

They have all made the nation proud with their craft.

Here are the top 10 funniest comedians in Nigeria 2021

I can boldly say there is no one in Nigeria who doesn’t know him.

Popular Nigerian comedian Bright Okpocha who is popularly known as Basket Mouth is one of the comedians who is regarded by many as the King of comedy in Nigeria.

He is a very funny comedian who has made a fortune from both stand-up comedy and short comedy skits.

However, he often collaborates with many other comedians in Nigeria.

He has bagged numerous awards and nominations in the comedy industry both within and outside Nigeria.

This make him one of the best in Nigeria, Africa, and the world at large.

Today, he is a brand ambassador for several multi-billion-dollar companies like Glo and many others.

These endorsement deals are said to be worth millions.

Ayo Makun (aka AY) is also one of the creative comedians in Nigeria that have taken comedy to a whole new level.

Aside from being a comedian, AY is also an actor, entertainer, TV host, and musician.

He is a well renowned talent in the comedy world, and is the host of the popular AY live show.

He is one of the richest comedians in Nigeria, and also one of the most decorated, in terms of awards.

As an actor, he has featured in several blockbuster movies like; A trip to Jamaica.

A movie that features Nollywood stars like Ramsey Nouah, Funke Akindele, and many other veteran acts.

A host of other movies includes 90 days in Atlanta, Accidental Spy, and more.

These movies are all world-class movies and the comedian really displays his natural talent of comedy in all of them.

Today, AY is one of the most sought comedians in all of Africa.

His works are seen all over the world.

He’s another popular comedian who is making the country proud.

However, he sets any stage ablaze with his jokes and he has made it big in the industry already.

He is the founder and host of the famous stand-up comedy concert called ‘Bovi Man’.

Due to his fame in the comedy industry.

He’s now a brand ambassador to many multi-million-dollar companies both within and outside the nation.

He often collaborates with Basket Mouth and also loves using the name ‘Akpos’ in his jokes.

In addition to that, he has featured in some Nollywood movies and several viral comedy skits that are viewed all around the nation.

He currently has a wife, and they have wonderful kids.

I Go Die is a popular Nigerian stand-up comedian with the real name ‘Francis Agoda’.

He is known for his slogan ‘Area!’

However, he yells that during his jokes and he is one of the highly respected comedians in the industry today.

His jokes often focus on the poverty in Nigeria and its effects on Nigerians.

Although he doesn’t feature in comedy skits and movies.

He remains one of the best comedians in both Nigeria and Africa.

With so many awards, endorsement deals, and more.

Francis Agoda is currently one of the richest and funniest comedians in Nigeria.

His talent has sold him far and wide and he keeps growing in the industry.

Everyone knows the tall dark-skinned Nigerian comedian Akpororo who is one of the funniest in the industry today.

Other than stand up comedy, Akpororo is also a musician just like AY.

He is loved by Nigerians and his talent has sold him out to the world.

Today, he has bagged some awards as a comedian, and also some lucrative endorsement deals with major companies.

Most of the companies including the popular telecommunications company ‘Airtel’.

He is gifted with the skill of comedy and is sure to turn any stage upside down with laughter.

The famous Nigerian comedian Okey Bakassi with real name Okechukwu Anthony Onyegbule is yet another top-rated comedian in Nigeria, who is gifted with the natural talent of comedy.

He has been in the industry for over 30years.

This makes him one of the best and most experienced comedians in the field today.

Aside from stand up comedy.

Okey Bakassi is also a top-class Nollywood actor, who has also made it big in the movie industry.

He often features major nollywood comedians like the popular Mr. Ibu (John Okafor), Bishop Imeh Umoh, and many others.

One of his popular nollywood movie titled ‘Festival of Madness’.

He has bagged so many awards both as a stand-up comedian and as an actor.

In addition to that, he is considered as one of the best in the industry today.

There is hardly anyone in Nigeria who doesn’t know the popular Godwin Komone (aka Gordons).

He’s often going with the slogan ‘halleluyah’ in his stand up comedy sessions.

Gordons is not new in the industry, as he has been into comedy since the early 90s.

He has released several CDs of his jokes, and most of them still sell well till date.

His natural gift of comedy has bagged him a couple of honours and deals.

Today, we can safely say he is one of the richest comedians in Nigeria.

He has collaborated with several comedians like Akpororo, and many others in short comedy skits and shows.

Is one of the most respected in the field today.

Gordons is a mentor to so many upcoming acts.

He shows them to the world through his concerts and shows.

Ali baba is another popular name in the Nigerian comedy industry.

He’s often jokingly tagged as ‘GCFR’, meaning the Grand Comedian of the Federal Republic of Nigeria.

This is a name he coined for himself.

He is one of the pioneers of modern comedy in Nigeria, and he is well respected for all his achievements in the field.

He is also the richest in the industry today.

Alibaba is one comedian who is making great gains from his natural talent.

He brought so many comedy stars into the limelight through his concerts.

Secondly, he serves as a big mentor to several upcoming acts both within and outside the nation.

Seyi Law is another topnotch comedian in Nigeria who is extremely funny, and successful in the comedy industry.

He always collaborates with the popular comedian Gordons.

He has a huge fan base with so many fans scattered far and wide.

He hails from Ondo state, Nigeria, and is happily married with lovely kids.

Aside from standing up comedy.

Seyi Law is also a well-known actor, who is also making it big in the movie industry.

He has featured in several movies including the blockbuster movie titled ‘Kpali’.

Seyi is a very funny comedian that is well sought for, and he is one of the biggest names in the industry today.

Julius is a top rated comedian, who is actually one of the funniest in the game today.

He is often referred to as ‘Julius de’ Genius’.

All through his career as a comedian, he has won so many recognitions and honours.

Today, he is a very rich comedian in Nigeria.

He is often used for top-quality shows and concerts, and he often delivers, as he turns tables down with hard laughter during his comedy sessions.

Aside from comedy, Julius is also a very well known Nollywood act, who has featured in several top quality movies.

Conclusion on 10 Funniest Comedians In Nigeria

The comedians in this list are sure to make you laugh out your sorrows.

They are well skilled in their craft and have taken comedy to the next level here in Nigeria.

Though these are the top ten funniest Nigerian comedians.

However, there are many others like; I Go Save, MC Acapella, Maleke, Funny Bone, and more.

These people are needed in our daily lives, as they uproot sadness from our hearts with their words and actions.

Thus far, I hope you found this article useful and interesting…