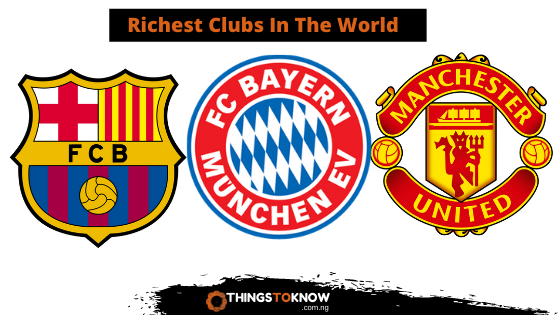 In this article, we are going to discover the top 10 richest clubs in the world and their revenue.

Today, we all see these football clubs signing players and paying them huge amounts every week.

With so much spending in their name, we keep wondering how much these clubs are worth in terms of cash.

Now, in this article we are going to look at the top 10 Richest Football Clubs in the world, and how much they are currently worth.

These football clubs all Carter for the salaries of top-class football stars, and they all have world-class stadiums and other training facilities.

Without taking any more of your time, here are the top ten richest football clubs in the world.

Here are the top 10 richest football clubs in the world

Although Tottenham is a club that is hardly seen spending huge sums on players.

They remain one of the richest clubs in the world.

After ending up as a runner up in the 2019 Champions League.

Tottenham made a lot of cash from bonuses and also from Premier League’s Monster Television deal.

As a result, the aforementioned teams do not make it to the list of richest clubs in the world.

Tottenham spent so much money on their new stadium.

They have recently signed Jose Mourinho as their coach and it is expected that this team will make some huge signings in their nearest future.

Although Arsenal is currently going through a hard time, they have still managed to remain one of the richest clubs in the world.

Despite their recent performance, they have managed to climb up the scale in terms of cash.

This was a deal that only a few clubs in Europe could actually afford.

With total revenue of $520 Million generated, Arsenal is ranked as the 9th richest club in the world.

Since Roman Abramovich bought Chelsea in 2003, the club has continued to climb up the scale in terms of riches.

Over the years, they have managed to win numerous major trophies and awards.

This has really boosted the revenue of the club.

Although Chelsea is going through a difficult time in the football scene, they can still hold up to the fact that they are one of the top richest clubs in the world today.

Recently after the sale of Eden Hazard, Chelsea was featured on the Forbes list of richest clubs.

The club with the seventh-highest revenue in the world is the English club ‘Liverpool’.

Liverpool came back to the old winning ways after they lifted the Champions League trophy in 2019.

However, it was the same club that became the Premier League title holders in 2020.

This club’s revenue has been seriously boosted with their steady return and performance to the Champions League as well as other international competitions.

All thanks to Jurgen Klopp for the current success of this team.

It is really amazing to see how much this club has spent over the years.

They slowly built a dream team and today, they enjoy the fruits of their patience.

With a revenue estimated to be $617 Million dollars, Liverpool sits firmly as the 7th richest football club in the world.

Another club that makes it to this list of the richest clubs in the world is Paris-Saint Germain.

PSG is one of the classic teams that are desperate for a major victory in the football world.

They were very close to earning the Champions League title last year in 2020, but they lost to Bayern Munich in Lisbon.

Over the years, PSG has spent huge sums on signing the likes of Neymar Jr and Mbappe.

Although their club value is ranked at eleventh in the world list, their club revenue ranks in the sixth position.

This makes them one of the richest clubs today.

If this team manages to win the UEFA Champions League in the coming years.

They will surely be ranked alongside teams like Barcelona, Real Madrid, and Bayern Munich.

Manchester City is surprisingly the fifth richest club in the world today.

Barely ten years back, they were on the sixteenth spot with $153 Million.

Today, they have climbed up to the number five spot in the list of richest clubs in the world.

This is indeed a great achievement for the club.

Since Pep Guardiola took over as coach at Man City, the club has improved greatly.

Today, so many people love to watch Manchester city play.

In recent times, they have been performing greatly in the UEFA Champions League.

This team has made a lot of expensive signings over the years.

As a rich team, they handle all the salaries and bonuses of these players with ease.

Today, with a revenue of about $678 Million, Man City sits firmly as the fifth richest team in Nigeria.

The fourth richest team in the world is the famous Bayern Munich.

Bayern is a German team that is also one of the most consistent Champions League teams in the world.

Besides, Bayern Munich FC is the Champion of the German league ‘Bundesliga’.

However, they have good squad management which arranges and pays their players well.

This makes them the best team of the season.

From several investments which generated so much revenue for the team, Bayern is said to worth a total revenue of $751 Million dollars.

Despite not having a single league title since 2013.

Being very unstable in the Champions League ever since Manchester United has continued to remain one of the biggest clubs in the world.

Even though the fans are frustrated with the performance of the club in recent years.

Manchester United surely sits at a top spot in the list of richest clubs.

While their performance remains unstable in recent times, the club is working ceaselessly to bring in perfect players and managers who will revive the team to its old glory.

Today, Barcelona is the second richest club in the world with total revenue of $815 Million

This club is argued by many to be the best club in the world.

This club houses the football star ‘Lionel Messi‘ who is also the highest-paid player in the world.

Currently, the club is in turmoil following their clash with their star player (Lionel Messi) who is actually on the verge of leaving the club.

The squad management of this club is actually not in good shape.

However, they remain one of the best clubs in the world.

Despite all the struggles in the past few years, Barcelona has continued to generate huge revenues for the successful management of the club.

Today, they are safely ranked as the second richest club in the world.

Real Madrid tops this list of richest clubs in the world.

Over the years, this club has continued to earn from major competition bonuses and several other investments.

Real Madrid is the club with the highest Champions League Wins.

Although they didn’t record any major victory between 2019 to 2020, they benefited greatly from their share in the La Liga TV revenue.

All through the years, Real Madrid has continued to remain on the top spot in the list of richest clubs.

They were slightly overtaken by Barcelona and Manchester United back in 2018.

Aside from being the richest football club in the world, Real Madrid is also ranked as one of the best clubs in the world.

Final Thoughts on The Richest Clubs In The World

So far, these are the top ten richest clubs in the world.

These clubs are all very popular across the world, and they have huge fan bases.

This list is actually based on the revenue of clubs, and not their total value.

That doesn’t make them way less richer, as they are all ranked as rich clubs.

However, this list focuses on the top ten richest clubs and their revenues.

We can see that Real Madrid tops the list again and they are followed closely by Barcelona who is in second place.

These two Spanish giants have been interchanging these top two positions for decades now.

Amongst all the teams in this list, Manchester City is the fastest growing.

So far, these are the richest clubs in the world today.

If you found this piece useful or interesting, feel free to drop your comments below.