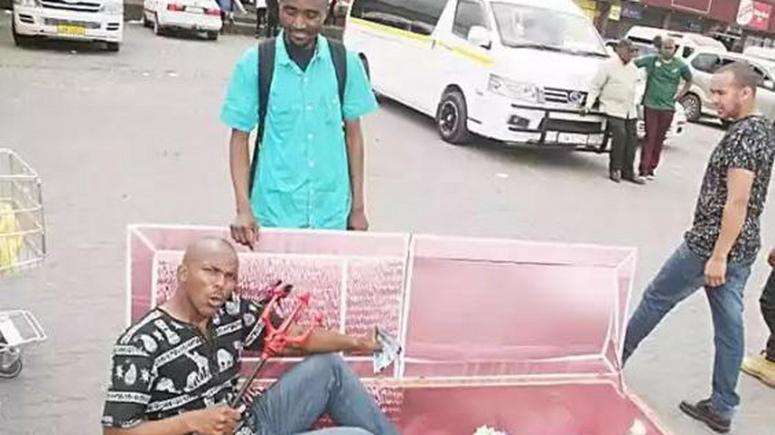 We are here to tell you the False Prophets In Africa

We all know that there are millions of churches across the globe today as well as false prophets are everywhere.

Here in Africa, so many churches have popped up, that we sometimes get confused when looking for a perfect one to worship in.

Now, while many of these men of God that head these churches are divinely called by God, so many of them are not.

Yeah! You saw it right.

So many prophets you see today were not actually called by God to the pastoral field.

Some of them acquire powers from other means and they flaunt these powers in the name of Jesus.

These false prophets mostly go into this pastoral line just for wealth and fame.

In this article, we are going to go through a list of False Prophets here in Africa.

This list is based on reports, news, and narratives from members of these churches owned by these prophets.

Without wasting any more time, here is the list of False Prophets In Africa today.

Here are the list of false prophets in Africa as of 2021.

Pastor Paul Sanyangore is the founder of the Victory World International Ministries.

Today, he is argued by many to be a false prophet here in Africa.

During one of his services, Prophet Paul could be seen allegedly talking to God through his mobile phone.

The video of that service got viral on the Internet in 2017.

It caused so many reactions from people across the globe.

Prophet Paul claims to have God’s direct phone number, which he uses to communicate with him directly.

During his services, he often calls Jehovah through his mobile phone, to get solutions to the problems of people.

So many members have even pleaded for the number, but he said he will only give it out when the time is right.

In a statement, Prophet Paul disclosed that he intends to start a TV show titled Heaven Online.

In this show, he promised to allow people to listen to his phone calls with the almighty God.

So many people across the world have tagged him as a false prophet for cooking up such lies.

Today, he sits firmly in this list of False Prophets here in Africa.

Prophet Emmanuel Makandiwa is a Zimbabwean prophet, who is considered by many to be a false prophet.

Back in 2015, a video went viral online, where the prophet asked members with stomach fat issues to come forward.

After prayer, it was noticed that they received instant healing.

However, a UK-based website later inspected the video and discovered that he actually fooled his members.

It was discovered that a woman who stood behind someone in front of the congregation actually deflated a balloon that was placed inside her clothes.

This led to a mighty uproar from people across the world.

Moreover, the prophet Emmanuel Makandiwa is currently rate as a false prophet in Africa.

Prophet Lesogo Daniel is another controversial African prophet who is considered to be false, due to his actions.

The South-African Prophet Lesogo Daniel is the founder of the Rabboni Centre Ministries.

He is well known for walking on his followers during his healing sessions.

He also advises them to eat only grass to get nearer to God.

During one of his services, this prophet urged hundreds of people to drop to the ground and eat grasses.

He also later advised his followers to drink petrol.

Back in 2015, he was even said to have placed a gay spirit in a young man, just to prove his powers to members.

His controversial method of healing and bizarre actions have earned him a spot today, as one of the false prophets here in Africa.

Prophet Andrew Ejimadu (aka Prophet Seer 1) is a Nigerian prophet who is based in Zambia.

This man of God claimed that he had a natural gift of vomiting money.

He even demonstrated this to his members.

During services, he could be seen vomiting these currencies.

His members often struggle for these currencies.

According to his statement, he said he is often loaded with millions right inside his stomach.

After a Church service which was hosted in South Africa, Prophet Andrew could be seen vomiting these currencies.

While a lot of people tagged him as a black magician, so many others called for the authorities to investigate him for money laundering.

He is currently ranked as a false prophet in Africa.

Prophet Penuel Mnguni (aka Snake Pastor) is a South African prophet and founder of the End Time Disciples Ministries.

He made his way to the league of fake prophets in Africa after he ordered his female members to strip naked in a healing service.

In this service, Prophet Penuel could be seen walking and sitting on their naked bodies.

This healing pattern was said by many to be satan-oriented, as the whole scene seemed sinful.

This is said to be a work of pure magic.

Prophet Paseka is another South African pastor who is said to be false.

In 2016, it was reported that this prophet blessed the underwear of people.

He said he transfers anointing into them, so he doesn’t need to lay hands on them.

All he needs to do is to speak to their underwear.

He said once he speaks, God gets into their underwear.

Also in an interview with a radio station, he said he has visited heaven.

There, he said he took some photos with the wife of our Lord and savior ‘Jesus Christ’…lol

In a further statement, he even said she is a black woman.

All these bizarre reports and narratives from members have earned him this spot as one of the top false prophets here in Africa.

Pastor Aphiwe is a South African pastor who is reported to be involved in some shady things.

He is said to have acquired powers from other means.

Back in 2015, he even hosted a church service where he preached from a coffin.

This really scared the hell out of children.

With so many bizarre things to his name, he is also ranked as a false prophet in Africa today.

Prophet Mpho Moletsane is said to be another false prophet.

He made waves across Africa when the news came that he sleeps with women to cast out evil spirits in them.

This pastor is currently ranked as one of the top false prophets in Africa.

Prophet Alph Lukau is also currently said by many to be a false prophet.

These allegations came up after a video of him raising a man from the dead surfaced online.

This video went viral all over the Internet.

However, it was later exposed as a trick, and the prophet is still being mocked by people on social media.

He is a very wealthy man of God, and also the founder of the Alleluia International Ministries in South Africa.

As a result of his tricks in the resurrection video, he is said to be a false man of God by many.

The 65-year-old Pastor Solomon Oladimeji of the popular Cherubim and Seraphim recently confessed in an interview to being a member of the Ogboni fraternity.

In his statement, he said he is not ashamed to tell the world of his membership in the fraternity.

He disclosed that he is a leader in the fraternity, and it has helped him to know Jesus Christ better.

He also said joining the fraternity has made him an overall better citizen.

From his Confessions in a recent interview, so many people tag him as a false man of God.

They say you cannot serve two masters at the same time, but that is what Prophet Oladimeji seems to be doing.

With these recent disclosures, he is currently said to be another false man of God here in Africa.

From this list, we can see that the Christian world is way deeper than we actually see it to be today.

While some men of God are genuinely called by God, so many are not.

These false prophets tend to attract a lot of members, as their magic miracles seem instant.

In all, you can now see some of the false prophets here in Africa.

Feel free to add any false prophet you’ve encountered in the comments session.

This is just a list of 10 False Prophets here in Africa.

There are many more which we do not know of.

These prophets are so many these days, that we find it hard to separate them from the good ones.

In all, we just have to be careful while looking for a place of worship.

Some churches are actually shrines disguised as churches.

Whoever seeks salvation in such places will most likely find it harder to get, as these places are salvation killers.

In all, I hope you found this piece helpful.