The Richest Rappers In Nigeria and Their Net Worth in 2021 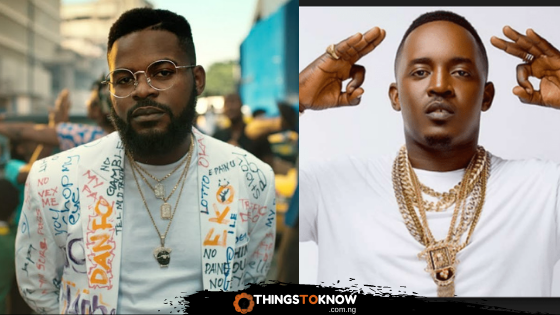 So who are the richest rappers in Nigeria 2021?

Want to find out?

Then you are reading the perfect article today.

As we all know, there are so many rappers here in Nigeria who have made it in the industry.

By creatively composing killer rhymes and amassing a huge fan base for themselves, these guys are all stinkingly rich today.

Today, so many new acts pop up in the hip-hop industry, and this is as a result of the inspirations they get from these successful rappers.

If you take a careful look at the top 20 richest musicians in the world, you will discover that the list is filled with about 60% rappers.

That is to tell you that the hip-hop industry is a very lucrative one.

Today, we are going to look at the top ten richest rappers in Nigeria, and their net worth.

So, without taking too much of your time, let us explore this wonderful list.

The number ten rapper on this list is none other than Lynxxx.

Chukie Edozien (aka Lynxxx) is a Nigerian rapper and songwriter who was born in November 1983 in Lagos State, Nigeria.

He was shot into the limelight back in 2010 after he released his debut album.

Later on, he dropped hit songs like Characha and African Bad Girl.

Today, he is ranked as one of the foremost rappers in the country.

However, Lynxxx is no longer active in the music industry.

Although he is not active, this rapper owns a couple of businesses and investments which brings him so much wealth.

What is Lynxxx net Worth?

As of today, Lynxx is estimated to be worth a whopping $1.8 Million Dollars.

This earns him a spot in this list of top ten richest rappers in Nigeria.

Olanrewaju Ogunmefun David (aka Vector) is a Nigerian rapper, singer, and philosopher who was born on the 7th of August 1984 in Lagos State.

After being active in the music industry for a short time, Vector was shot into the limelight in 2015.

Over the years, he has made waves in the hip hop world.

Today, he is not only ranked as one of the richest rappers, but also one of the best.

His unique rhymes and tunes have given him a firm name in the industry.

What is Vector net worth?

Currently, Vector is said to have a net worth of about $2 Million Dollars.

This makes him the ninth richest rapper in Nigeria.

Today, you will all agree with me that Ice Prince is one of the most famous rappers in Nigeria.

Panchak Henry Zamani (aka Ice Prince) is a Nigerian rapper and songwriter who was born in 1986 in Minna, Niger State.

This singer is from Northern Nigeria.

However, it is almost impossible to fish out where he is from by merely looking at him or hearing him speak.

He does not have a tribally coated tongue, so a lot of people do not know that he is a northerner.

Ice Prince is one of the most respected rappers in Nigeria today.

He actually came into the limelight with the hit song titled ‘Oleku’.

This song quickly became one of the most remixed songs in Nigeria.

As a rapper,Ice Prince is the recipient of several international awards.

Although he has not dropped any songs of recent, he is still well remembered for dropping major hits like; Superstar, Oleku, Aboki, I Swear, and more.

What is Ice Prince net worth?

Though Ice Prince is no longer that active in the music industry, he still makes a lot of money from the industry.

From several endorsement deals, album and music sales, and more, he is currently said to worth a whopping $2.5 Million Dollars.

This makes him the 8th richest rapper in Nigeria.

On the seventh place, we have Ill Bliss.

Ill Bliss (aka Oga Boss) is a Nigerian rapper from eastern Nigeria.

Although he is no longer an active rapper, Ill Bliss still plays a vital role in the Nigerian music industry.

He is the founder of the famous Capital Hills Music Label.

This is the music label that groomed the likes of Chidinma.

Aside from his music label, Ill Bliss is also a co-owner of Capital Dreams Pictures.

He co-owns this company with Clarence Peters.

Ill Bliss is a rapper who often lives his life out of the eyes of the media.

As a result of this, so many people do not know much about him.

Although he no longer drops hit tracks like he used to, he is still an active part of the industry.

What is Ill Bliss net worth?

As we speak, Ill Bliss is said to be worth a whopping $3 Million Dollars.

This earns him a position as the seventh richest rapper on this list.

Naetochukwu Chikwe (aka Naeto C) is a Nigerian rapper who was born on the 17th of December 1982 in Houston, USA.

He is ranked as one of the foremost rappers in the history of Nigeria.

However, he is no longer active in the music industry.

Although he is not active, he has revealed that he might drop a few more projects in the future.

Despite the fact that he has left the scene for the newer rappers, his fame still remains in the industry.

What is Naeto C Net worth?

Currently, Naeto C is estimated to worth a whopping $3.8 Million Dollars.

This makes him the sixth richest rapper in Nigeria.

In fifth place on this list of richest rappers in Nigeria, we have Falz.

Folarin Falana (aka Falz) is a Nigerian rapper, songwriter, actor, and lawyer who was born on the 27th of October 1990 in Lagos State.

He was shot into the limelight with the hit songs; Soft Work and Soldier featuring Simi.

Falz is not just a rapper but also a well known actor.

As an actor, he has featured in a couple of movies and television series.

Over the years, he has appeared in a number of movies like Chief Daddy, New Money, and also Merry Men.

Having gained so much fame in the country, Falz has bagged a lot of cash today.

He has amassed a large follower base in the country, and he is loved by so many fans today.

What is Falz Net Worth?

Currently, Falz is said to have a net worth of $4 Million Dollars.

With such huge net worth, Falz sits firmly as the fifth richest rapper in Nigeria.

Remilekun Abdul Khalid Safaru (aka Reminisce) is a Nigerian rapper who was born on the 26th of January 1981 in Kaduna State, Nigeria.

Although he was born in Kaduna, Reminisce is originally from Ogun State, Nigeria.

He is one of the rappers in Nigeria who grew at a fast rate in the industry.

He was shot into the limelight way back in 2012, and he has been relevant in the industry ever since.

However, he adds a mixture of the Nigerian pidgin English most times.

Just like other rappers on this list, Reminisce has also signed a couple of lucrative endorsement deals with major companies.

Today, he is even a brand ambassador of the famous Samsung Mobile.

What is Reminisce Net Worth?

As we speak, Reminisce is currently estimated to be worth a whopping $7 Million Dollars.

This makes him the fourth richest rapper in Nigeria.

Jude Lemfani Adaga (aka M.I) is a Nigerian rapper and songwriter who was born on the 4th of October 1981 in Jos.

He gained world recognition after he released his hit song titled Bullion Van in 2014.

As a result of his performance,he won an MTV award, and also bagged an international nomination.

Over the years, this singer continued to drop major hits and bag major awards.

He is the founder of the famous Chocolate City Record Label.

This label is well known for signing acts like Ice Prince, Brymo, and a few others.

Although most of these rappers are no longer in this record label, they owe part of their success to the label.

What is M.I Net Worth?

As we speak, M.I is estimated to be worth a whopping $8 Million Dollars.

This makes him the third richest rapper in Nigeria.

Chibuzor Nelson Azubuike (aka Phyno) is the second richest rapper in Nigeria today.

He is a rapper, singer, and record producer who was born on the 9th of October 1986 in Enugu State, Nigeria.

This rapper came into the spotlight back in 2014 after he released his first studio album titled ‘No Guts No Glory’.

As a music producer, he actually started his career back in 2003.

All these songs made waves across the nation.

Just like a few other rappers in Nigeria,Phyno often raps in his native dialect.

He raps in Igbo, and this has amassed him a large follower base in the eastern region.

As a popular figure, he has signed a couple of lucrative endorsement deals with major companies.

What is Phyno Net worth?

With a current net worth of $11 Million Dollars, Phyno is safely the second richest rapper in Nigeria.

On the number one spot in this list of richest rappers in Nigeria, we have Olamide.

Olamide who goes by the birth name ‘Olamide Adedeji’ is a Nigerian rapper, singer, and record producer.

After dropping his debut album titled Rapsodi, the singer was shot into the limelight.

Ever since, he has been on top of the Nigerian music industry.

When he started his career in the industry, he was a signee under the Coded Tunes Label.

Today, he is the founder of the famous YBNL Nation Record Label.

Having won several local and international awards, he is also ranked as one of the best rappers in Nigeria.

Olamide is well known for rapping in his local Yoruba dialect, with a little mixture of the Nigerian Pidgin English most times.

As a result of this, he has a large fan base in the Western region of Nigeria, and also on the streets.

As a matter of fact, he is even referred to as the ‘King of Street Bangers in Nigeria’.

Over the years, he has dropped a total of nine studio albums, one collaborative album, and one EP.

All these music projects made waves across the nation.

He is also well known for hit singles like Bobo, Wo, Motigbana, and many more.

What is Olamide net worth?

As a result of his fame, Olamide has bagged a lot of endorsement deals with major companies across the world.

He is also the brand ambassador of Itel Mobile.

His endorsement deals are said to be worth millions of dollars.

With so many album sales, music streams, and endorsement deals, Olamide is currently said to worth a whopping $12 Million Dollars.

This makes him the richest rapper in Nigeria.

Conclusion Of The Richest Rappers In Nigeria

From this comprehensive list, I believe you now know the top ten richest rappers in Nigeria.

Although most of these rappers are no longer active in the industry, they still make a lot of money from the industry.

All the rappers in this list are well known rappers who made waves in the industry at different times.

Some of them are still making waves till date.

So far, that is all we have on the richest rappers.