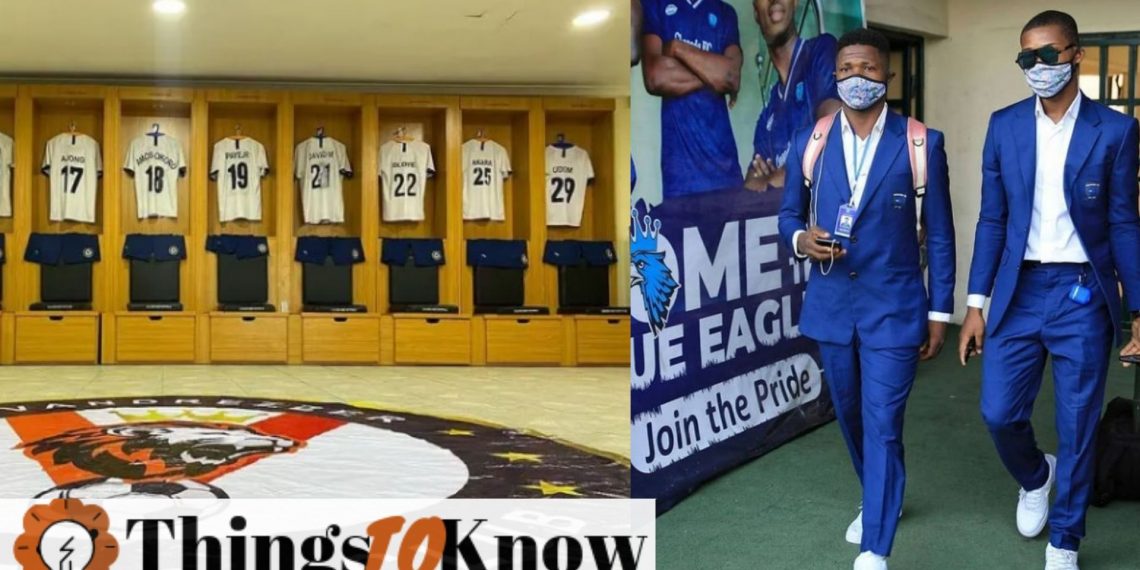 Football has evolved throughout the world with a lot of revenue generated for the growth of the game. For instance in the North African league the facilities in used are top notch and it is in the same level of what is obtainable in Europe. In West Africa, facilities, marketability are all nothing to write home about…

The Nigerian Professional Football League and other lower leagues in the country have suffered from poor organization, management and publicity. The Federal Ministry of Sports receive not less than N6 million budget every year but nothing to show for.

Everything about the Nigerian domestic league is questionable and we keep on going for a turning point.

Over the years, the emergence of Vandrezzer and Football Club and Gbagada Football both of the second tier has given Nigerians some glimpse of hope.

Thingstoknow will be sharing photos of their dressing room and amazing graphics. Something that is not common among teams in the topflight.

Vandrezzer Football Club, is one of the most outstanding Nigerian teams. From merchandising, advertising, facilities and so much more. The team was originally based in Akwa Ibom before they relocated to Lagos. Founded in 2019, they currently participate in the National League, the Lions of naija remains the most followed club in Nigeria and 36th in Africa in just one and half year of existence..

Football is business and Vandrezzer have already set the tone to achieve financial interest. Theirs matches are stream online on all platforms.

Recommended for you: Top 8 Most Stylist Super Eagle’s Player

Gbagada Football League, location, Lagos. The team participate in the Nation Wide League (NLO). They are gladly following the footsteps of Vandrezzer Fc in all ramifications.

The Blue Eagles hail from the central Lagos neighbourhood of Gbagada and have swiftly progressed from street football to the Nigerian national league in a matter of years.

You May Also Like: Beautiful Wives and Girlfriends of Top 7 Footballers

Growing from a 5-a-side football culture, the club was reborn in 2013, entered the Nigerian league in 2017, were promoted in their first season and are now preparing for life in the Nationwide League’s 3rd Tier.

Checkout photos of the team