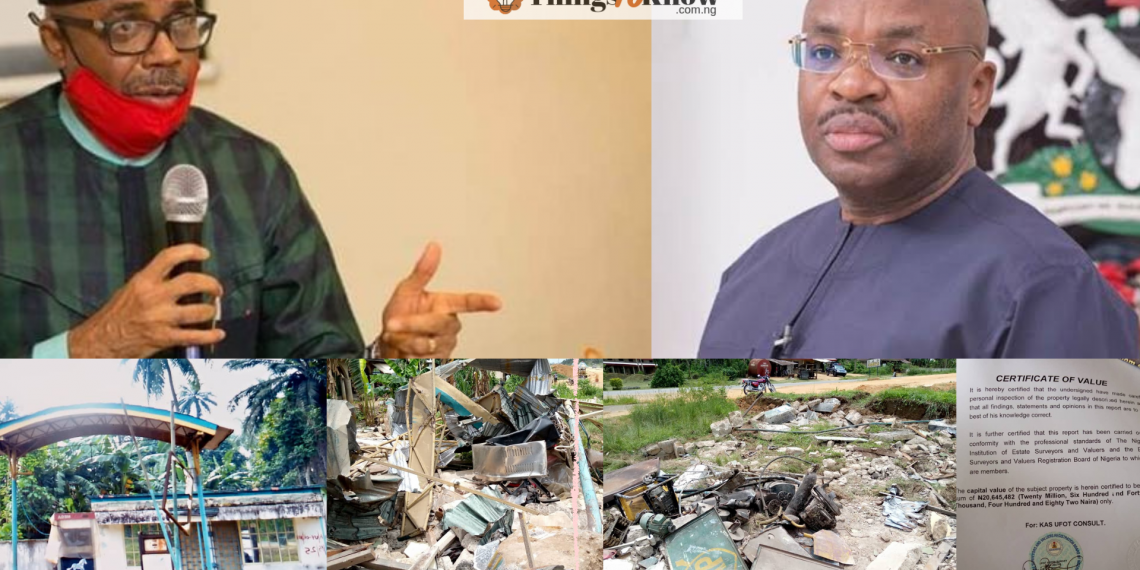 Despite an existing case for compensation in court, the Akwa Ibom State Government through its Ministry of Works and Fire Service has demolished Forte Filling Station operating under Kijobee Nigeria Limited in Nsit Atai Local Government Area of the state.

The demolition exercise which took place on April 9, 2021, was reportedly supervised by officials of the Ministry of Works/ Fire Service led by its Commissioner – Prof Eno Ibanga, DPL Construction Limited and armed security operatives numbering about 20.

In September 2019, the construction firm, without any compensation paid, reportedly acting on the orders of the Ministry which was then under the stewardship of Mr. Ephraim Inyangeyen, who is now Governor Udom Emmanuel’s Chief of Staff, removed concrete slabs at the entrance of the property, making it impossible for customers to throng the station for business. A section of the fence was also destroyed during the exercise.
Correspondences sent by the property owner to the Ministry were not attended to.

Court papers filed by the victim alleged that the destroyed fence led to flood invading the station and breaking the manhole, as well as entering underground tanks and destroying petroleum products.
The victim had prayed the court to order the Ministry of Works to pay compensation for damages amounting to 100 Million Naira.

Read Also: 10 Duties of Government in Nigeria To Their Citizens

Sources say the Ministry declined revealing the value of the property arrived at by its valuer(s), but a valuer contracted by the property owner pegs its value at around 30 Million Naira.

The victim’s Statement of Claim in court also alleged that the Ministry had also ordered the demolition of another filling station owned by the victim in Oron, Akwa Ibom State.

The victim, Apostle Joseph Peter Eyoh, was on April 1, 2021, invited via his lawyer to collect compensation money in respect of his property at Nsit Atai.
The invitation was through a letter issued and signed on behalf of the Commissioner by Barr. Iniobong M. George.
“The cheque was ready and is awaiting collection at the Ministry of Works and Fire Service, Uyo, and that some properties which were not captured is seriously being looked into and when the cheque is ready, he will be contacted,” part of the letter reads.

Addressing demand by the property owner for the Ministry to reevaluate the property, the letter mentioned that it was “seriously considered.”

On arrival, Apostle Eyoh was reportedly directed by the Commissioner to withdraw the case from court, that the sum of 13 Million Naira would be paid to him as compensation – a figure way below the N30m value earlier pegged by the property owner’s valuer.

When Eyoh, a 70 year old man with 2 wives and 15 children to cater for, rejected the offer, the Commissioner reportedly told him and one his sons that he would have to apply “executive power.” Eyoh, however, did tell the Commissioner that he will have to receive legal advice from his lawyer before signing any money-related document in the Commissioner’s office.

To make good his promise of “applying executive power”, the Commissioner personally supervised the demolition amid heavy presence of armed security operatives.

Efforts to reach the Commissioner for his reaction proved abortive as calls sent to his phone line were unanswered.