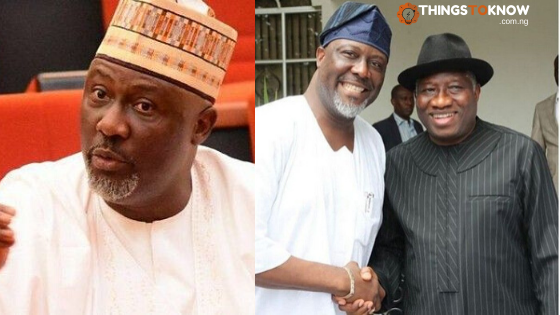 Senator Daniel Dino Melaye is a member of the People’s Democratic Party (PDP).

Through the democratic election practice, He made His way as a Nigerian Senator of 8th and 9th National Assembly respectively.

He is currently representing Kogi West in the Nigerian Senate and the Chairman Senate Committee on FCT Abuja.

Besides, Dino Melaye’s net worth is N3.8 billion.

However, Dino has popular called was born in Kano state but he is a citizen of Kogi state.

Besides, he has been appointed for various positions in political power and as a governmental associate.

In fact, he is mostly known for anti-corruption using his twitter account to drop videos and pictures of his luxury lifestyle.

The same person has claim fighting corruption in Nigeria.

Nevertheless, he won the election as a member of the House of Representatives representing Kabba/Ijumu federal constituency under the All Progressives Congress (APC).

In 2015, He decamps to the People’s Democratic Party (PDP) and was re-elected to the 9th senate.

However, he has won several awards, published a book and travel around the world.

Moreover, many controversies have been brought to the federal government table about him.

But he has claims to be a person fighting corruption with several properties that is unknown to the public how he acquired.

In this article, we will try to cover much information about this Nigerian Politician called Dino Melaye.

Dino Melaye is popularly called by his fans was born on January 1, 1974.

However, he is an indigene of Kogi state but was born in Kano state, Nigeria.

He completed his secondary education at the Command/Air-force Secondary School.

While his primary education was at the Gandun Nassarawa Primary School, Kano.

Moreover, he continues to pursue his educational career at Ahmadu Bello University where he studies Geography.

In 2000, he graduated from the Ahmadu Bello University, Zaria after being the president of the National Association of Nigerian Students (NANS).

According to the wiki, he was later appointed the Secretary-General of the African Youth Council.

After he might have faithful all righteousness regarding the role.

He was later nominated for the same position in the Commonwealth Youth Council.

Moreover, during the regime of President Olusegun Obasanjo.

He was appointed to lead the Presidential Advisory Council on Youths and anti-corruption.

Senator Dino Melaye started his Political career in 2011 when he won the House of Representative seat.

During that time, he was under the All progressive congress (APC) as a member representing Kabba/Ijumu federal constituency.

In 2015, He moves ahead to contest for the senate seat under the People’s Democracy Party (PDP).

He successfully won the election to represent Kogi West in the 9th senate.

However, He has been interviewed several times in various television and radion authority.

During the interview session.

He claims that he is a man of ambitious and will definitely become the president of the Nation one faithful day.

Most of his followers love him just for his truthfulness and integrity to humanity.

In fact, he heartfully supported the nomination of Senator Bukola Saraki as the Senate President against his party wish.

If you are talking about Dino Marriage life then you need to know that dino has been married for 10 years.

However, he was married to Tokunbo Melaye and she had to file a divorce case in 2013 after beating by Dino Melaye.

According to Legit.ng, Dino has been beating his wife for a good nine years.

This mystery case began during the pregnancy of their second son.

Moreover, she has also been reported rushing to the hospital at night several times still in on the same case.

This also led to Dino Melaye sleeping with their Housemaid, Alero Falope and even use their matrimonial bed to perform this insane act.

However, he was even confirmed impregnated Nollywood actress Bisi Ibidapo Obe while spreading the wrong news that his wife is dead.

Currently, Dino Melaye is left with no parents.

He’s official children known to the public are three which they had together with Tokunbo Melaye.

Moreover, this Nigerian lawmaker has also been reporting sleeping with many other women and even denies being the father of some.

Dino Melaye has been recognized with many awards and nominations both national and international.

However, here are the Dino Melaye awards and recognitions

Dino Melaye has published a book title “Antidotes For Corruption: The Nigerian Story”.

However, the book is said to input a strong negative reaction against the social and political opinions of the people.

In fact, it always said to be a “cut and paste” content from various news media with and without citation.

This book has also confirmed having no intellectual input from the author “Dino Melaye”.

The Nigerian Politician, Dino Melaye has lived an extravagant lifestyle on cars.

If you want to talk about his collections of cars.

Then you need to know that the senator always bought the most updated car models.

Most of the collections of Dino Melaye Cars and automobile models are;

You can view the pictures of Dino Melaye cars and automobile models here.

When talking about the net worth of this Nigerian politician.

In the calculation of all his cars, properties, and other assets.

Dino Melaye is estimated to worth N3.8 billion