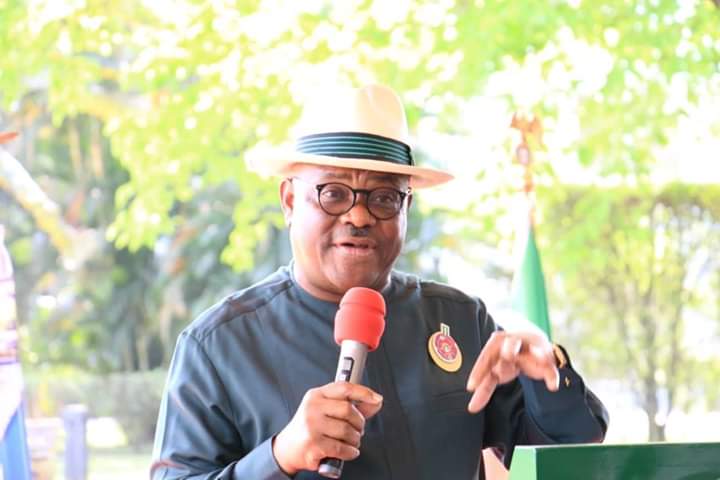 Governor Wike wondered why President Buhari would relegate key issues like preserving the territorial integrity of the country to governors of the 36 states when he, the president was the commander-in-chief of the Armed Forces of the country.

Wike made his stance known in a statement issued by his media aide, Mr Kelvin Ebiri during the commissioning of the 21-kilometre Odufor-Akpoku-Umuoye road in Etche local government area , Rivers State on Tuesday.

Wike said, “Mr President, you are the Commander-in-Chief of the Armed Forces of the Federal Republic of Nigeria.

You appoint Inspector-General of Police, you appoint the Chief of Army Staff, Chief of Naval Staff, the Commissioner of Police, Director of Department of State Service, and other heads of security.

“Which one do we appoint? How can people appointed by Mr President be under me?”

Governor Wike lambast Buhari that his constitutional rights was beyond taking loans and that there was no shame in accepting that the APC have failed in delivering it promises made to Nigerians at the build up of 2015 elections.

He said, ‘‘It is not only to borrow money for Nigeria that you’re in charge. You must also be in charge of other things including security. Who signed order 10? Is it the governors?”

“Mr. President was short of calling names of those governors who run to Aso Rock when they are supposed to stay in their states to see the needs of their states and people.

“Mr. President should have come out openly and said, my APC governors, stop worrying me. Go back to your states and do your work. On that, I support him.

“Thank God, Mr. President knows that I am not one of those that go to visit him over one problem or the other. I, as the governor of Rivers under PDP, you’ll never find me there.”

Meanwhile, the statistics from the Debt Management Office showed that the Buhari’s led administration has borrowed a whooping $2.02billion from China since 2015.

The data also showed that Nigeria’s total debt from China as of June 2015 stood at $1.38billion.

In March, the Nigeria’s debt portfolio rose to $3.40billion and the loans were concessional loans with interest rates of 2.50% yearly, a tenure of 20 years and grace period (moratorium) of seven years.

The debt office said that the terms of the loans were compliant with the provisions of Section 41 (1a) of the Fiscal Responsibility Act, 2007.