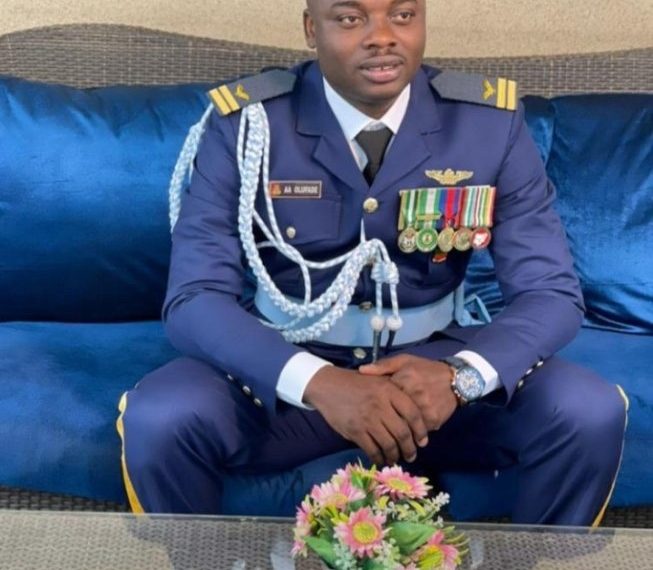 George Alfred, the father of military pilot, Flt. Lt. Alfred Olufade who was killed in plane crash on Friday, 21st May has asked for strength while grieving the death of his son.

Olufade, alongside 10 other top ranking military officers including the Army Chief of Staff, Lt. Gen. Ibrahim Attahiru had died in a Beachcraft 350 aircraft conveying them to Kaduna state for an official assignment around 6pm.

The departed military officers were laid to rest on Saturday at the National Military Cemetary, Abuja in a dense and sad ambience. The President Muhammadu Buhari and his vice, Prof. Yemi Osinbajo were absent at the burial.

Though the departed officers have been laid to rest, families and loved ones have continued to express their grief and heaviness via social media.

For George Alfred, the grief of losing his only son can only be imagined, not told. The grieving father while speaking with newsmen noted, “It is devastating. I just need prayers for strength. I pray that God should hold us because he was my only son. He was very intelligent, generous, extremely humble, and dedicated to his duty. He was a giver and a lover of Christ.”

“He was in the seminary before he eventually got into the military school.

RELATED: SALARIES OF NIGERIAN ARMY: THEIR RANKS AND SALARIES STRUCTURE IN 2021

“He was the only Airforce officer in my state. He was a special child. He graduated as the youngest in his set. When he wanted to join the military, I encouraged him from the beginning to the end because he had passion for flying. I encouraged him and prayed for him.

Also, the Nigeria Chief of Defense Staff, Lucky Irabor who explained how the incident happened hinted, that ”after landing at the Kaduna International airport, the cold hands of death which manifested in the stormy weather ended that journey. The war against insecurity must be won, truly must be won. All we ask of you is to keep praying for us.”

The aircraft went down trying to land at the Kaduna International Airport “due to inclement weather.”