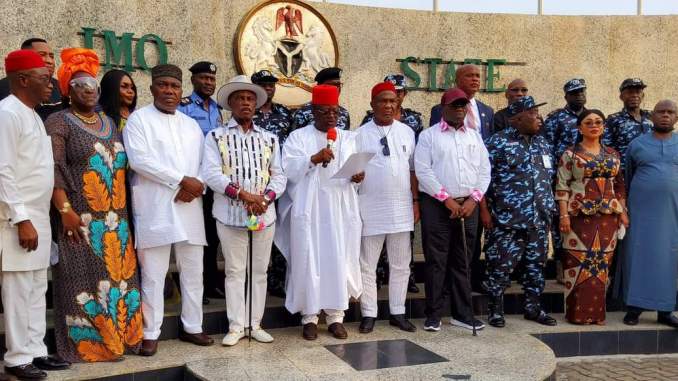 Governors in the South Eastern part of Nigeria on Monday held a virtual meeting to discuss the collapsing security situation ravaging the region particularly the assassination of a chieftain of the All Progressives Congress, Ahmed Gulak.

Recall, Gulak was on Sunday, May 31st assassinated by unknown gunmen on his way to the Sam Mbakwe Cargo Airport in Owerri, the Imo State capital while returning after an official assignment.

Following the death of Gulak among other security threat, killings and unrest happening in Imo and Enugu states, the governors met to deliberate and discuss measures of restoring peace to the region.

The governors who expressed their sadness over the unfortunate death of Gulak, resolved to tackle the security challenges in the region.

While condoling with the family of Gulak, people of Adamawa state and others who have lost their lives in the region, the governors vowed to work with the security men to ensure the killers of Gulak are brought to face the full wrath of the law.

The governors in a communique signed by Chairman, South East Governors Forum and Governor of Ebonyi State, Engr. David Nweze Umahi, and issued after the meeting commiserated with the governor of Imo state, Sen. Hope Uzodinma over the security breakdown in the state and resolved to work in tandem with him to see the end of the banditry in Imo state.

The communiqué reads: “In our efforts to tackle the rising security challenges in South East, a meeting of South East Governors Forum was convened on Monday,  31st  May, 2021 via zoom to review the security situation in  the zone and the following resolutions were therefore reached:

“That South East Governors Forum condemns in strong terms the brutal  assassination of Alhaji Ahmed Gulak by gunmen on Sunday, 30th, May, 2021 while on his way to Sam Mbakwe Cargo Airport, Owerri, and stands with  the Governor of Imo State, His Excellency Sen. Hope Uzodima and the security agencies in their efforts to unravel the masterminds of this heartless killing.”

That the Forum heartily commiserates with the immediate family of Alhajji Ahmed Gulak, the government and people of Adamawa State over the unfortunate killing of their son.

“That the Forum thanks the President and father of our nation for timely directing the security agencies to fish out the perpetrators as this will further strengthen the bonds of unity and trust with our Northern brothers and sisters.

“That we thank our brother Governors from the North for their understanding in the face of this unfortunate murder of their son and we assure them of our commitment in unravelling the masterminds of that dastardly act.
“That the Forum sympathizes with the families of all those who lost their lives during this moment of violent hostilities by bandits in South East.

“That the Forum shall leave no stone unturned in tracking and bringing to justice all those involved in the armed banditry that is currently ravaging South East Zone.

“That the Forum urges members of the public to exercise restraint and allow the security agents to continue with their investigations with the assurances that all those who have a hand in the brutal murder of Alhaji Ahmed Gulak and other killings in the Zone would be brought to justice.”