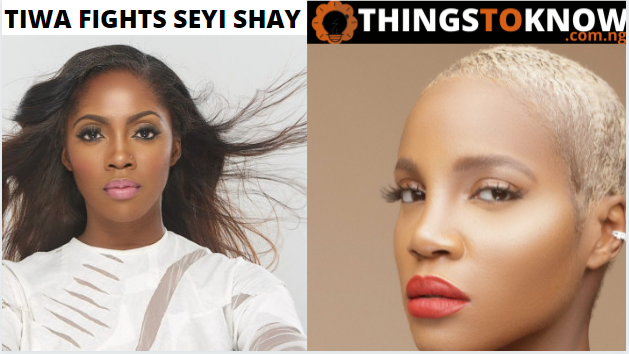 It is now an established fact that the long beef between the duo of Tiwatope Savage and Deborah Oluwaseyi Joshua, popular Nigerian female musicians have not been totally settled.

The duo popularly known as Tiwa Savage and Seyi Shay who are respectively doing well in the Nigerian music industry took their long beef to the next level when they fought dirty at a salon they met today, June 8, in Lagos state.

In 2019, Kenyan singer Victoria Kimani and Seyi Shay had dissed Tiwa Savage when they both made a cover of Kizz Daniels’s hit track ‘FUCK YOU’ which became an internet sensation. On her part, Seyi Shay had dissed Tiwa Savage, saying – “You know I’m not Savage, I pay my bills” while Victoria Kimani had in her lyric said, “Grandma African bad gyal, turning 45 and still claiming bad girl. You can block me from a show but you can’t block my blessings. We all know you selling pu*ssy and it’s so depressing”.

Two years down the lane, Tiwa Savage seems not to have forgiven her industry colleagues over the diss which Kimani portrayed her image as a call-girl hiding under the guise of music to sell her body.

In a viral video online, Tiwa Savage was seen dishing out hot truth when Seyi Shay walked up to her to say hi. The angry Tiwa Savage made her point clear that she didn’t need Seyi’s greeting after all the uncensored diss they threw at her.

Tiwa said, Don’t come to me and think you can say hi with the dirty and disgusting spirit that you have. You think I have forgotten what you guys did? How many years ago? You and Victoria Kimani. You think I can forget?

While the heated argument continued, other ladies reportedly in the salon to have their hair done tried to stop the two who were almost getting too close from exchanging blows or having a physical fight.

In response, Seyi Shay explained “the only reason why I greeted you is to try and squash all that is going on and to say sorry. I am not going to listen to this because you got your facts wrong.

Also read: Mystery Behind T.B Joshua’s Death, His Last Days and What He Lived for

“Tiwa, how about the things that you have done? You want me to open everything here? I am not like you. I am not going to do that. If you want to start acting up and acting like an “agbaya” right now, carry on.”

At this point, Tiwa Savage who was already enraged and fiercely ready to damn consequences, swore on her only child Jamil that God should take him away if she has never taken jobs from her colleagues or tried to block her from getting jobs in the industry.

On the part where Seyi Shay threatened to open her secret in public, Tiwa body shamed and damned her to spill whatever secret she felt she had against her.

She said, “you’re the one that wants to open my ‘nyansh’. Please, open it. Your ‘nyansh’ is the dirtiest in this industry. You f*cking hoe, slut! Open it! There is nothing I have done in this life that I regret. Nothing! Everybody knows I am very proud of my shit.

“But you, look at you. You look half-dead. Look at your skin. You know what? For a clear skin, you need to mind your business. That’s what will clear up your f*cking ugly skin.”

You May Like: Kizz Daniel Net Worth: Bio, Career, Album, Cars, and House

She continued, “B*tch, I am made! I have money; I have nothing to take from you. I am not going to be hired for a show and say something else.”